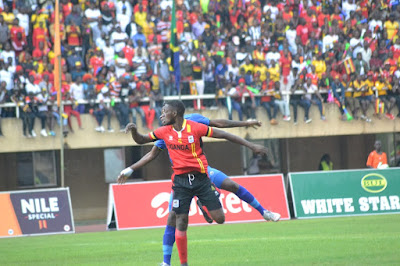 When the Uganda Cranes take on Lesotho in a group L encounter in the AFCON 2019 qualifier at Mandela National Stadium, Namboole, head coach Sebastien Desabre and his technical team will think of a new central defensive partnership.
The sad development accrues not because of injury, but, due to yellow card received by Simba Sports Club defender Murushid Jjuuko in the goal-less home draw against East African rivals Tanzania.
Jjuuko was among the three Uganda Cranes players booked in the game alongside other defenders Nico Wakiro Wadada and Godfrey “Jajja Walu” Walusimbi.
Having been cautioned in the away game in Praia city against Cape Verde, Jjuuko is therefore suspended for the next game.
The calm – cum – solid center half will however be available for the away game that will have in Maseru after three days.
During the game with Cape Verde, Emmanuel Arnold Okwi and Jjuuko were the two cautioned Uganda Cranes players for unlawful tackles.

That said, Uganda Cranes will for the third time in the current qualification campaign forge and assemble a central defence pairing.
In Praia, Jjuuko had partnered with Bernard Muwanga before combining with Hassan Wasswa Mawanda to face Tanzania.
The options available:
On the 23 man team that faced Tanzania, Timothy Dennis Awany was the natural central defender among the un-used substitutes.
Therefore, Awany, alongside experienced Isaac Isinde (who did not make the 24 man team for the final residential camp) and Bevis Mugabi could bounce back into the frame alongside the utility Mawanda.