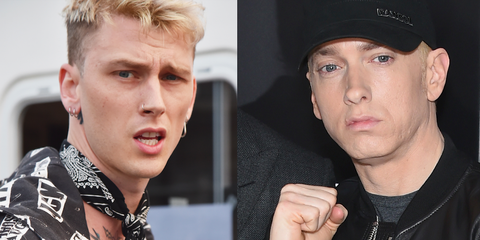 
As the hip-hop community eagerly awaits Eminem's response to Machine Gun Kelly's "Rap Devil" diss track, a Shady Records producer nearly confirmed that a retaliation on Em's part is already in the works. Mr. Porter joined Culture Untold on Tuesday (Sept. 4) to discuss how Slim Shady would combat MGK's "Rap Devil."
"Right now, he in there working. We doing something else right now, but trust me, we’ll get to it. I’ll tell you this, I wouldn’t wanna be [Machine Gun Kelly]," he contested. "It’s great that you took that opportunity and did that, hey, kudos to you, good for you. The one thing that I’m worried about, you remember when Thanos threw that whole planet at Iron Man?"
Eminem's longtime friend Bizarre also shared similar sentiments with his fellow D12 affiliate by warning MGK of what's to come courtesy of the Detroit legend following his bristling diss track. "But boy, the repercussions... oof. The boy gonna do you something nasty. Y'all better stop playing with that boy," the 42-year-old declared.