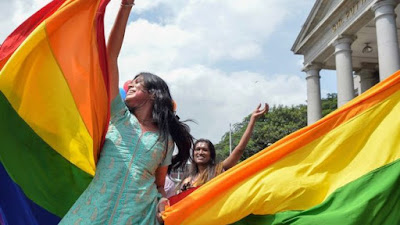 ﻿
NEW DELHI — In a groundbreaking victory for gay rights, India’s Supreme Court on Thursday unanimously struck down one of the world’s oldest bans on consensual gay sex, putting to rest a legal battle that stretched for years and burying one of the most glaring vestiges of India’s colonial past.
After weeks of deliberation in the Supreme Court and decades of struggles by gay Indians, India’s chief justice, Dipak Misra, said that the colonial-era law known as Section 377 was “irrational, indefensible and manifestly arbitrary.”
“We have to bid adieu to prejudices and empower all citizens,” he told a packed courtroom.
The court said that gay people were now entitled to all constitutional protections under Indian law and that any discrimination based on sexuality would be illegal.
All around this country, explosions of happiness erupted — and some of outrage, as well.
Gay people hugged, danced, kissed and closed their eyes and cried on the steps of the high court in Bangalore. In Mumbai, human rights activists unleashed a blizzard of confetti.
In their judgments, the justices said that homosexuality was “natural” and that the Indian Constitution was not a “collection of mere dead letters” and should evolve with time.
The Indian justices seemed well aware of the place they were taking in history. Nation after nation has been extending full rights to gay people under the law, and now India, as the world’s second-most populous country, stands, at least legally, among the more progressive.
Human rights activists said they hoped this decision would reverberate around the world.
“This ruling is hugely significant,” said Meenakshi Ganguly, the South Asia director for Human Rights Watch. It could set a precedent for nations with similar colonial-era laws to end their “discriminatory, regressive treatment” of gay and transgender citizens, she said.
The court said that Section 377, which was written in the 1860s to cover what were then considered unnatural sexual acts, would still be used in cases of bestiality, for instance, but that it could not be applied any more to consensual gay sex.
The justices seemed moved by the stories they had heard in court from the gay plaintiffs about harassment, blackmail, abuse and persecution.﻿