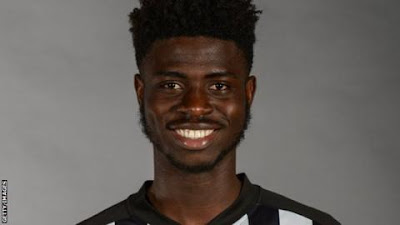 Newcastle United under-23 player Mohammed Sangare has withdrawn from Liberia's Africa Cup of Nations qualifier against DR Congo on Sunday.
The 19-year-old has been unable to travel as he does not have a copy of his UK residence permit.
Sangare was born in Liberia but has lived in England since the age of 14.
"Sangare has a valid Liberian passport but if he travels to Monrovia without his [residence] permit, getting back will give him problem," LFA manager Sebastian Collins explained.
"We thought it would be in the best interest of all parties that he secures his document before coming to Monrovia.
"He tried to fast-track the issuance of his residence permit, which went missing - but it will be issued next week."
Sangare played 15 games and scored two goals for Newcastle's under-23 in the Premier League Division 2 last season.
He was one of 13 overseas-based players named by new Liberia coach Thomas Kojo.
Striker Terrance Tisdell, who recently joined Portugal's AD Sanjoanense from Mozambique's CD Costa do Sol, has also withdrawn from the squad due to lack of residence permit and was replaced by striker Tonia Tisdell of Turkey's ‎Denizlispor.
Meanwhile, DR Congo coach Florent Ibengé will be without five players due to "injuries and club commitment".
Defenders Arthur Masuaku of West Ham United in England and Jordan Ikoko of Guingamp in France and midfielder Neeskens Kebano of Fulham and striker Yannick Bolasie of Aston Villa in England are all injured.
Goalkeeper Ley Matampi Mvumi, who now plays for Saudi Arabian side Al Ansar after joining from TP Mazembe in DR Congo, would only have been available 48 hours to kick-off.
Mvumi has been replaced by former Swiss youth international Joel Kiassumbua of Servette, who has two caps for DR Congo.
Revised Liberia squad:
Goalkeepers: Boison Wynney de Souza of (Real Mallorca B, Spain), Tommy Songo and Ashley Williams of (LISCR FC, Liberia)
Defenders: Teah Dennis and Jeremy Saygbe of (Barrack Young Controllers Liberia); Alvin Maccornel and Aloysius Simujla of (LPRC Oilers, Liberia), Kemoh Kamara (LISCR FC, Liberia), Adolphus Marshall Nagbe of (Gudja United FC, Malta), Joel Johnson Alajarin (Charlotte Independence, America)
Midfielders: Sekou Sheriff, Saah Nyumah and Allen Njie (LISCR FC, Liberia) Ebenezer Solo of (LPRC Oilers, Liberia), Oscar Murphy Dorley (FC Slovan Liberec, Czech Republic), Sylvanus Nimely (Spartak Moscow II, Russia) Sam Johnson (Valerenga Oslo, Norway)
Strikers: Anthony Laffor of (Mamelodi Sundowns, South Africa), William Jebor (Wydad Casablanca, Morocco), Seku Conneh (Ansan Greener, South Korea) Kpah Sherman (MISC MIFA, Malaysia).
﻿