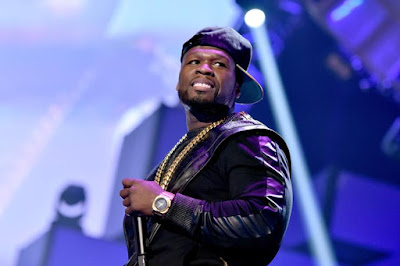 50 Cent is now bringing in Floyd's son into the picture.
It doesn't look like 50 Cent is ready to stop taking shots at Floyd Mayweather anytime soon. After the G-Unit rapper said Floyd was responsible for the death of his late friend and his wife last night, Fif is now bringing Floyd’s son into the picture.
On Tuesday night, Fif kept the IG shots coming, first sharing a police report from Floyd’s son, Karaun, years ago that reveals Floyd was allegedly hitting his mother. “I saw my dad was on my mom and my mom said to go to the office my dad was hitting her,” the police report says.
Fif left the following caption with the post, “Damn champ you and Karaun have a good relationship. What happen here. 🤔get the strap.”
Then shortly after that post, Fif decided to share another questionable photo of Floyd, this time getting awfully close to Diddy as if the two were about to kiss. Fif asked fans to leave some captions for the photo, saying “what you think they was saying? 🤔 LOL😈get the strap,” he captioned.
Check out the latest shots (below) and keep your eyes peeled for further posts.
Update: Shortly after Fif's police report went up, Floyd's son, Karaun, responded to the accusation, saying he's riding by his dad side and that all is good. "All good over here. Worry bout your family first," he captioned the post aimed at 50.﻿