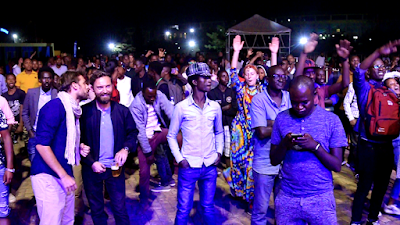 
Alpha Blondy limpressed on Thursday night, as he headlined this year’s KigaliUp music festival at Amahoro National Stadium’s main parking ground, on Thursday night.
Rated by his fans as one of Africa’s best reggae exports, the Ivoirian music legend, born Seydou Koné, ensured it was a memorable night for those who attended, belting out hit after hit, while his fans chanted and danced throughout his performance.
The show started at 7:30p.m, with local heart-throb Andy Bumuntu, sending revelers into a frenzy with his tracks ‘Mukadata’, ‘Mine’, and ‘Ndashaje.’
He was followed by Eric Ngangare, aka Eric One Key, and Milly Umutoni, who also delivered great performances.
The event’s host, Lion Imanzi, kept the crowd entertained in between the performances.
Alpha Blondy took to the stage at 9:20p.m. He was backed by his band Solar System.
The nine-piece-band was composed of two female backup singers, three guitarists, two saxophonists, a pianist and a drummer.
The crowd got hysterical showing off placards and screaming the Ivorian’s name in admiration. While on stage, the bubbly music legend reached his pocket and pulled out a piece of paper that he had written on a few words in Kinyarwanda: “Muraho! Amakuru yanyu?”, and … Murakoze”, he read out, as he greeted the crowd.
Without wasting time, the star belted out fan favourites such as, ‘Jerusalem’ ‘Brigadier Sabari’, ‘Jah Rasta’, ‘Coco de Rasta’ and ‘Peace in Liberia’, among many, in an hour-long performance. You could feel the excitement from the audience, as his charisma pervaded the venue.
Alpha Blondy acknowledged the applause with grins. He knew people enjoyed his performance, and had a great time, despite the low-turn up.
Most of Alpha Blondy’s songs are politically and socially motivated, and are mainly sung in his native Dioula, French and English. The messages, too, basically preach peace and love among the global community, regardless of their religion.
The festival, now eight years old, has always been held in Kigali, becoming one of the country’s most prominent music events. It was started by singer Jacques Murigande, also known as Mighty Popo, with the objective of helping build a strong music industry in Rwanda and to push the culture of playing live music in the country to get it up to standard and put local music out there.
Every year, the KigaliUp brings together famous musicians from across the world, for a weekend of live musical performances and other fun activities in Kigali.
This year, the festival will also feature performances from some of the big names like Annet Nandujja (Uganda), Kenny Wesley (German), Joey Blake and American rock band Third Eye (US), and Lulu (Scotland).
The three-day outdoor music event started on July 26 and ends tonight, on July 28.﻿