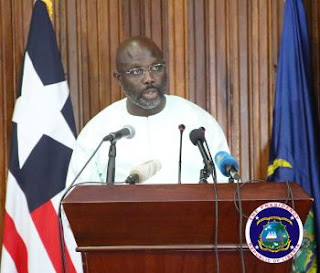 President George Weah said on Monday he would take measures to tackle rampant inflation and economic hardship, including injecting $25 million into the forex market and taking steps to bring more local cash into the formal banking system.
"I am fully aware of the negative impact of the declining exchange rate on the economic well-being of the Liberian people, and the serious hardship that this is beginning to cause," Weah said in an address to the nation.
"We believe a stronger and more aggressive enforcement of monetary policy ... should go a long way to ... address the problem," he added.
“The government will announce a series of monetary and fiscal measures that we believe should help reverse the decline in the value of the Liberian dollar,” President Weah declared. He added that the government also intends to engage the minds of the best and the brightest Liberian economists, both at home and abroad and even seek advice and active support from our international partners.

“We also have an economy based on traditional exports such as iron ore, rubber, coffee, etc., which are shipped to foreign buyers in their raw state, without any value-added propositions which could have also contributed significantly to industrialization and employment.”
“Additionally, the prices and demand for our exports are determined and affected by factors beyond our borders, and are therefore beyond our control. Slumps in demand for the products which utilize our raw materials will always result in externally-generated shocks to our economy.”
President Weah said: “The key to success in this endeavor is for Liberians to produce more goods and services locally, so that we reduce our importation of goods and services from abroad, whilst at the same time increasing our exports and adding value to the raw materials that we ship to the world.”
“In this regard, our Government intends to embark upon a major push to ensure that Liberia becomes more competitive in terms of domestic production. And in so doing, we intend to encourage and empower Liberian businessmen and Liberian-owned businesses to lead the transformation of the Liberian economy.”
“We will enable them to become more competitive, by providing affirmative policies and support, including ready access to finance and expertise. The aim and intention of this approach is to encourage import substitution and manufacturing for export, as well as sustainable wealth and job creation.”