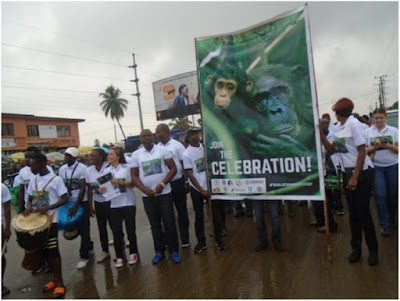 ﻿
Forestry Development Authority (FDA) over the weekend officially launched a wildlife Confiscation Unit in Monrovia, with the mandate to ensure that illegal wildlife trade is deterred as a way of protecting endangered species throughout the country, an FDA release said.
According to the release, the creation of the new Unit represents a practical translation of the strong desire of the FDA and partners to uphold the globally demanded doctrine of conservation of nature.
The program was held under the theme, “The Chimpanzees Are Our Neighbors.”
“This gesture is geared towards conserving Liberia’s natural heritage for current and future generations through public awareness and enforcement of both the Liberian and international wildlife laws,” the release said.
Importantly, the launch of the Unit coincided with the celebration marking the first ever World Chimpanzee Day in the country, which took place at the Du-port Road Park in Paynesville on Saturday, July 14, following a parade along the Paynesville Town Hall. Based on its historic relevance, the program was graced by an array of leading stakeholders in the forest sector as well as representatives from the diplomatic circle, including the European Union (EU), USAID (United States Aid for International Development), United States and British ambassadors respectively. There was live mural painting, assorted drama performances by the Eddie Theater, drumming and musical shows, all of which formed an important component of Saturday’s event.
The program was coordinated by the FDA, Paynesville City Corporation, the Liberia Chimpanzee Rescue and Protection, Wild Chimpanzee Foundation and other partners in the sector.
While launching the Confiscation Unit, FDA Managing Director, C. Mike Doryen, profoundly appreciated the combined efforts of the partners and reiterated the entity’s unbending position on the conservation and protection of wildlife in the country.
Doryen said the law that protects wildlife is an important tool as FDA and partners strive to protect and conserve the country’s rich natural heritage.
He called on partners to be ever more vigilant in efforts to ensure that the conservation dream of the country becomes a reality.
Mr. Doryen then committed $US5,000 as FDA’s starting contribution toward the project.
Funded by the Jane-Global Institute, this Unit is a critical step in the establishment of a much larger wildlife trade and trafficking initiative by the FDA, and supported by multiple local and international partners.
Meanwhile, partners in the conservation effort have pledged to work assiduously with the FDA, to protect and conserve Liberia’s rich heritage. USAID, EU (European Union), Liberia Chimpanzee Rescue and Protection, Society for the Conservation of Nature, Wild Chimpanzee Foundation, Fauna and Flora, AMBERO/GIZ and  WABBIC, described Liberia as host of beautiful treasure and separately vowed to ensure that the rights of endangered animals are protected.﻿