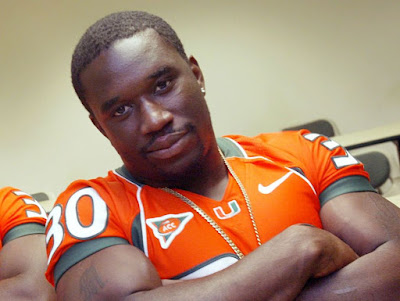 Though the cause of death was initially unclear, Moss' former high school football coach, Steve Davis, told The Sun-Sentinel that the running back had been dealing with an unspecified medical issue.
Moss was a first-team All-Atlantic Coast Conference selection in 2005 and ran for 1,942 yards and 26 touchdowns at Miami. A spate of injuries slowed him toward the end of his career, however, and he ultimately never played a snap in the NFL.
A South Florida native, Moss drew national attention for his high school accolades in Broward County, which has historically been a football hotbed. He ran for more than 7,000 yards at Blanche Ely High School and was named a Parade All-American, according to The Sun-Sentinel.
"He was, by far, the best player I’ve ever coached at the high school level," Davis told the newspaper. "You had defenses and everybody that we played, all 11 guys knew he was going to get the ball. He’d still have 250 yards. You just couldn’t figure it out."﻿