Liberia the fastest growing flag in shipping and offshore 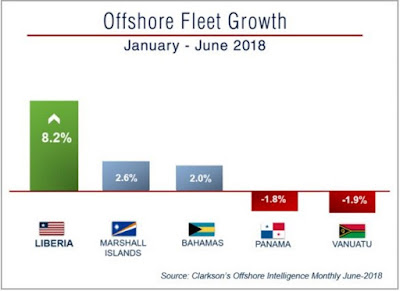 Liberia is the fastest growing major open registry in 2018 in both the shipping and offshore sectors, according to leading shipping services provider Clarksons in its Clarksons World Fleet Monitor June 2018. Alfonso Castillero, CCO of the Liberian International Ship & Corporate Registry (LISCR), the US-based manager of the Liberian Registry, says, “I am delighted to see that Liberia continues to be the leading flag in 2018. It has grown by 2.2 percent in terms of gross tonnage overall so far this year, while Panama showed negative numbers and the Marshall Islands growth of just 1.7 percent.
“The market recognizes that Liberia has improved its services and invested in technology to make the lives of its clients easier without increasing its fees. This is in stark contrast to our competitors, who have put into place steep fee increases and added costs, without significant forms of savings for owners, despite the difficult market conditions. “Despite high scrapping volumes in recent years, the Liberian Registry has shown significant growth while maintaining a reputation for the highest standards of safety and responsiveness. “Liberia continues to live up to its commitment to helping shipowners navigate what are – despite certain recent positive improvements – still very difficult market conditions.
The Liberian Registry responds quickly to issues involving owners, and in many instances anticipates difficulties before they arise. In this way, it helps keep Liberian-flag ships moving efficiently and safely along global trade routes.” In the offshore sector, meanwhile, Liberian-flag fleet growth has peaked at 8.2 percent so far in 2018, compared to the figures for Panama (down by 1.8 percent) and the Marshall Islands (up by only 2.6 percent), and the Bahamas (up by only 2.0 percent). Alfonso Castillero says, “The first half of 2018 has shown what a strong presence the Liberian flag has in the offshore sector, with an increase in market share three times that of the next major open registry. This is due in no small measure to the strong fundamental understanding by the registry’s staff – many of whom have practical experience of the offshore industry – of the problems facing this fluctuating
sector.” 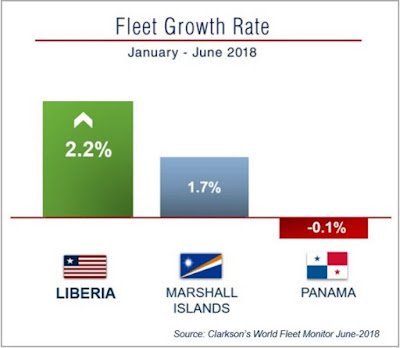