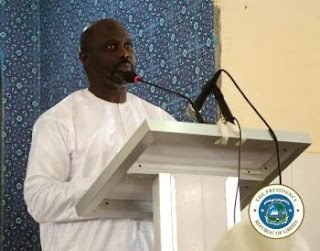 President Weah spoke Friday, July 20, 2018 at the Thanksgiving and Intercessory prayer held at the Lusinee Kamara Mosque in Morrison Farm, Paynesville as part of events marking the 171st Independence celebration of Liberia.
He said: “Let me say this for all us, especially the young people. No matter what, once you are there people, will have dissenting views; this is life. If you do good, another person will not appreciate it; you do bad, somebody will not appreciate it. So, no matter what you do in life, there will be critics; what is important is for us to remain focused on what we want to do.”
The statement explains his avows, as promised during the campaign period, of the overall national development drive the country has ever witnessed since it was founded.
“We are about to witness our 171st Anniversary, in the simple term, birthday; when we were designing our program to know what will be the order of the day, what we will be doing, the first thing that was on our agenda was to unite our brothers and sisters – Liberians,” the President said to emphasize his quest for a united Liberia and people.
According to him, the situation Liberia faces did not start with his administration, but stressed his commitment to change the situation; while at the same time enjoined Liberians to watch for an unprecedented pace of development between now and December.
“As we are about to celebrate our independence, what is happening today reflects things that will be on the books but we are criticized for doing the right thing than those that did the wrong thing,” President Weah indicated.
Although fanaticism is considered part of human infrastructure, the President said it is good for people to be constructive in their criticisms. “Liberia will be 171 on July 26. When the problem started; it is in the five months of my administration?” he quipped, and again begged the indulgence of Liberians to exercise a bit of patience because he has taken the responsibility to fix the problem.
Earlier, Sheik Rashid A. Sheriff who delivered the sermon and called on Liberians to unite, give the government a chance, and also desist from negative criticisms.
He urged Liberians to be thankful to God all of the things happening because that is the essence of our creation. “Unity is always the instrument for the growth of any nation,” he emphasized.
﻿