Central Bank of Liberia to Withdraw L$4bn from Circulation 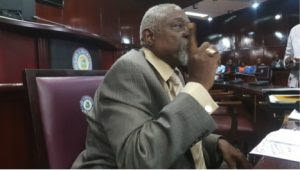 Central Bank Governor-designate, Mr. Nathaniel Patray, said since the announcement of infusing US$25 million into the economy, the Central Bank of Liberia (CBL) has withdrawn L$59 million from circulation with just US$ 1.2 million.

At his Senate confirmation hearing last Friday, July 19, the CBL Governor-designate told senators that government is intending to use the US$25 million to withdraw L$4 billion that would be kept in the bank for a year; this according to him, will help stabilize the Liberia dollar against its US dollar counterpart.
Responding to questions about the huge depreciation of the Liberian dollar against the United States dollar he said, this has always been the case and President Weah’s announcement is in two phases: short and long-term, which he believes could reduce inflation and take the Liberian dollars to an appreciable level.

“Depreciation started way back and not today’s problem. The short-term will stabilize the situation and the appreciation of the Liberian dollars against the US dollars will be the long-term measures.’’ He also told senators that some of the problems are because 65 percent of foreign exchangers are foreigners.
Mr. Patray also disclosed that the Bank has set up six teams that will be withdrawing the money. “As of July 19, 2018, the rate has been one hundred and fifty Liberian dollars to US$ 1 as selling rate and L$152 as selling rate.
If he’s confirmed, he is going to take over the CBL with over 27 years of postgraduate experience in Economics, Banking, and Finance relevant to developing countries.
Patray, 68, completed his secondary education at the College of West Africa (CWA) on Ashumn Street in 1970, and later enrolled at the Wayne County Community College, Detroit, Michigan, USA, where he obtained an Associate Degree (AA) in Business Administration.
A year later, he earned a Bachelor of Business Administration (BBA) Degree in Industrial Management from Detroit Institute of Technology, (now Lawrence Institute of Technology), USA. He holds a Master’s Degree in Economics from the University of Detroit, Michigan in 1977.﻿