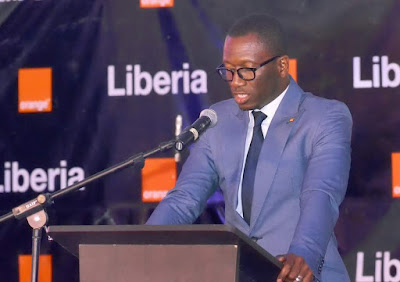 At the honoring
The Liberia Revenue Authority (LRA) has named Orange Liberia as its highest domestic tax payer for the fiscal year 2016/2017.   The award was presented to the CEO of Orange Liberia Mr. Mamadou COULIBALY on July 27 at a well-attended program held at the Monrovia City Hall.
LRA Officer in charge and Acting Commissioner General Madam Decontee T. King-Sackie outlined that the event was hosted as a way for the LRA and the Government of Liberia to recognize and appreciate voluntary tax payers.    “We want to thank our tax payers who have contributed to the revenue envelope of the Government of Liberia,” said Madam King-Sackie.    She went on to explain that there were a total of 39 individuals, businesses, and corporations invited for various distinction with the most prestigious awards being the Gold Award presented to the top highest contributor.  She explained for the Gold Award category:  “when we look at those we are honoring in terms of highest tax payer, we are looking at the total contribution they have made in monetary terms.”
Presenting the award to Orange Liberia was Mr. Charles Bright Chief Economic Advisor to the President, served as proxy on behalf of Liberian President H. E. Ambassador George M. Weah.   Mr. Bright congratulated Orange Liberia and thanked the company for its commitment to supporting development in Liberia.   “We appreciate all of the taxes that you pay to Liberia voluntarily.  You are making the difference for Liberia.”
Receiving the award from Mr. Bright and Commissioner King-Sackie, Orange Liberia’s Chief Executive Officer Mr. Mamadou Coulibaly said that the recognition from the LRA was highly appreciated.   He said that Orange Liberia was delighted to have qualified for the award barely a year after entering the Liberian telecommunications market.   “As a company, we are very committed to paying our taxes and abiding by all the laws and regulations of the Government of Liberia,” said Mr. Coulibaly. “We are proud and excited to be able to support the Government in achieving its pro-poor agenda.”    Mr. Coulibaly went on to thank Orange customers for their loyalty, noting: “It is only because of the loyalty of our customers that we have been able to earn the revenue to become the number one tax payer in Liberia; so we thank all of our customers for making this success possible.”
Both Mr. Bright and Madam King-Sackie also separately acknowledged the role that Orange Liberia has played as the first GSM provider to set up a Mobile Money platform in April 2018 that allowed the payment of Government taxes and bills to the LRA.  Mr. Bright recalled that President George Weah was the first Liberian to make a tax payment using the Orange Money Platform and encouraged other Liberians to use the platform to pay their taxes and others bills, such as Birth Certificates Fees﻿