"No matter who you are and where you are, so as long as you are a Liberian, it is your patriotic and nationalistic duty to put your hands on deck to help us build our country" – President Weah Calls On Liberians

July 26, 2018
President George Manneh Weah has called on all Liberians to join him in building the better and great nation longed since the founding of the country 171 years ago.
President Weah acknowledged that the task of building a vibrant nation is a momentous challenge that requires the overriding involvement of all Liberians in a strong bond of peace and unity. 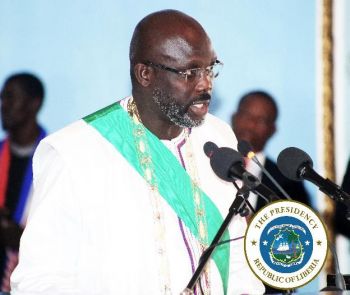 In a special statement at the official Independence Day Program at the Centennial Pavilion on Thursday, July 26, 2018, the Liberia leader Weah prayed God’s blessings, direction and guidance as Liberians endeavor to chart a new course for the country.
According to him, developing the nation would prove fruitless and futile in the absence of peace and unity amongst Liberians.
“In order to move Liberia ahead and achieve sustainable development, we must be united and at peace with ourselves; we need a strong union and the peace that abide in our hearts for the prosperity of our beloved country,” President Weah declared.
“I, therefore, call upon all you, irrespective of our political persuasions, to join me and let’s build a better Liberia.  Let us begin now to move our country; let us come together to recover the lost years.”
President Weah maintained that the government alone cannot shoulder the task of rebuilding Liberia; rather it is a task for all Liberians to undertake. “No matter who you are and where you are, opposition or not, in the rural parts of the country or in the Diaspora, in the towns or villages or in the city; so as long as you are a Liberian, it is your patriotic and nationalistic duty to put your hands on deck to help us build our country,” he urged Liberians.
“Fellow Liberians, today, just six months in a six-year tenure, I made a solemn pledge that will continue to apply myself diligently and to work toward a more perfect peace among our people, with the aim and objective that we become more reconciled, united and peaceful and prosperous nation.”
The Liberian leader expressed the hope that all Liberians will be able to celebrate gains achieved together in next year’s celebration of national independence, and added “it is my hope that at the age 171, Liberia under our leadership would have accelerated the pace of the coming of the happy land that we will wish our country to be - a glorious land of liberty and prosperity by God’s command.”
Earlier, the National Orator, Samuel D. Tweah, Jr. called on Liberians to join the government for the advancement of the country, and also emphasized the need for corruption, which retarded the growth and development of the country, to be fought at all levels of the national sphere – including the churches, mosques and schools.
He suggested to national government to even remove from the classrooms teachers caught in the web of corruption. The national orator also stressed the importance of diversifying the economy for the benefits of Liberians.
﻿