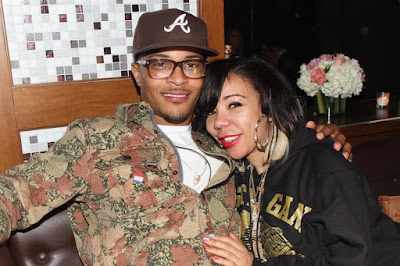 
T.I. and Tiny have a complicated relationship but ultimately, it seems the two of them are willing to try and make their marriage work. Over the weekend, Tiny celebrated her 43rd birthday. She ended up throwing a birthday bash in Atlanta while Tip was partying out in Las Vegas. However,  T.I. decided to pull a solid and surprise Tiny with a brand new custom Mercedes-Benz for her birthday.
Tiny was gifted a custom $225K Mercedes-Benz for her birthday, courtesy of T.I. According to TMZ, T.I. worked pretty quickly to ensure that his wife would have the car in time. He called up an Atlanta customizer to do the work for the car in less than 24 hours in order to gift her on her birthday. The car itself goes for $130K and he dropped an additional $93K in order to get it customized.
ATL Custom Auto Sales' Auto Cooper said they added a black wrap with an "all-black-everything finish" as well as 22" wheels. True Cooper said T.I. called him shortly after 2 p.m. on Friday. Tip said that he needed it by Tiny's birthday on Saturday. The work was done by a three workers and got it done by 1 p.m. on Saturday.
In the clip, Tiny has a bunch of Christian Louboutin bags in the backseat which T.I. had waiting for her when he gifted her the Benz. ﻿