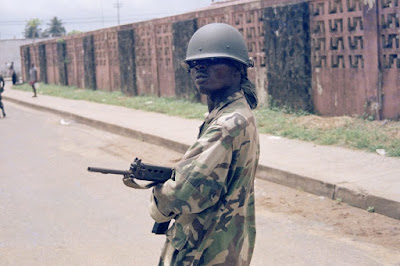 
A Liberian refugee living in Southwest Philadelphia agreed Thursday to voluntarily leave the United States after becoming the latest target of federal investigators seeking justice for atrocities committed during the bloody civil war that gripped the West African nation in the 1990s.
Isaac T. Kannah, 51, admitted last year that he had lied about the role he played in the multifactional conflict in sworn testimony he gave in 2011 on behalf of a former wartime ally who faced deportation proceedings.
Kannah’s sentence, approved Thursday by a federal judge in Rochester, N.Y., makes him the third member of the Philadelphia region’s sizable Liberian expatriate community to be swept up this year in a push by U.S. investigators to root out and deport those involved in the many documented human rights violations that occurred during the fighting.
Despite atrocities committed on all sides, no one has ever been held accountable in Liberia in the two decades since the end of the conflict that left more than 250,000 Liberians dead and millions more displaced. Many former military commanders are now living in the United States amid the flood of asylum-seekers who were welcomed into Philadelphia and other cities at the height of the crisis.
Kannah — a self-described military attaché to the Liberia Peace Council, one of the many fighting factions – first came to the attention of federal authorities in 2011, when he was called as a defense witness in immigration proceedings for the group’s former leader, George Boley.
Government lawyers had accused Boley, then working as an administrator in the Rochester school system, of lying about the fighting force he oversaw, which committed extrajudicial killings of civilians and conscripted children to serve as soldiers.﻿