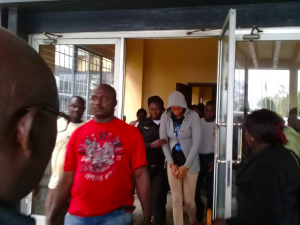 Ms. Abu reportedly killed her boyfriend Morris Johnson, who was the head of Claims and Benefits Department of NASSCORP.
The five-year relationship between Abu and Johnson came to an end when the duo went out to a local entertainment (Pepper Fish) in Paynesville when her ex- boyfriend’s performance grabbed her attention. Her ex-boyfriend is Alexander Freeman alias ‘Nigger Blow,’ a Liberian musician.
The action by Abu according to the police charge sheet, got the deceased angry that led to him raining insults at her.
“The accused herself started becoming irritated as the result of her boyfriend’s behavior, decided that she wanted to go home. Their departure became impromptu from the club; Morris Johnson (late) drove Pinky and her friend Genève Jallah home at their SKD Sports Complex Community residence; they entered and locked the door,” the Police charge sheet said.
The police said minutes after the deceased drove away, he returned and started accusing the accused of extra love affairs and raining insults at her.
“The arguments between both of them over extra love degenerated into a fight at which time the deceased started to beat on his lover Abu in the room. Their confusion continued in their living room where deceased was continuously beating Abu.
“He knocked her down, sat over her and hit on her with several punches. Neighbors came around to separate them but both failed to pay attention to stop the fight.”
The police charge sheet declared that Abu ran in her kitchen and took a knife from the cupboard which she wounded the deceased with.
The both sustained injuries, the deceased sustained puncture wound on his back during the scuffle while Abu sustained deep laceration on her right thumb and her left hand.
The duo was taken to JFK at what time he was pronounced dead on arrival by medical practitioner while Abu underwent intensive medical care before being turned over to the police for investigation.
Police disclosed that the silver blade kitchen knife allegedly used in the killing was recovered.
During police investigation, Abu narrated that while the deceased was beating and rigging her down, she fell and he sat over her giving her punches on her head.
“I managed to wake up, at which time I begin dressing back from him going in the kitchen, but he followed me and stopped me from the back and I fell and hit the sink at which time my lip got cut.
“I took the knife from the cupboard in the kitchen to scare him to stop beating me but he rushed on me and knocked my hand and the knife dropped on the ground.”
“When I tried to take the knife, he went over me and the both of us started tussling to gain possession of the knife and threaten to stab me to death.”
“When he lifted his hand with the knife, I lifted my hand and he wounded me on my hand, so I decided to run in the room to lock the door, but my hand left at the door at which time he wounded me again.”
She said she has no idea how the deceased sustained the injury on his back but believed it was during the tussle to gain possession of the knife from the ground.
Police investigation established that the duo had heated exchanges prior to leaving the club on June 13, 2018.
“That after the suspect (Abu) grabbed the deceased by his shirt, he became irritated and started to beat on her which led to the fight between both of them.
Investigators also established that Abu angrily ran towards the deceased at which time he turned to escape and was stabbed on his back by Abu.
“That upon the accused stabbing the deceased, the deceased forcibly grabbed the knife from her which caused laceration in her right palm and puncture wound on her left hand.
“That after the wounding the deceased he was seen holding his back in the hallway with the knife saying, “You juke me, I juke you.”
The police further stated, “Coupled with evidence adduced, the physical injuries on the victim back, this investigation has resolved to charge suspect Johnetta Pinky Abu with the crime of murder and be forwarded for prosecution in violation of chapter 14 subchapter A and section 14.1 of the revised penal law of Liberia.”﻿