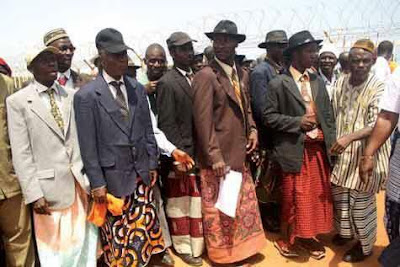 The origin of this Grebo costume:
The lappa, coat and hat is the traditional Grebo attire. Grebo men traditionally wear a country cloth lappa, called daloh, which is tied into knot, called daloh kpo, at the front. The daloh is worn with a simple shirt called the wlaloh. A black hot hat completes the ensemble. After the settlers arrived in Liberia, Grebo chiefs and other high society Grebo men began wearing the Daloh and replaced the Wlaloh with western style suit jackets as a symbolism of their existence between two cultures: Grebo and settlers