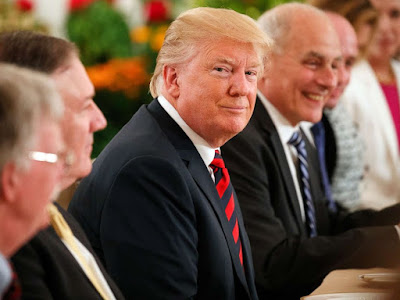 The big meeting isn't on the schedule until Tuesday in Singapore, while we wait, here is a rundown of the biggest actions that took place overnight, as Singapore is 12 hours ahead of Eastern Daylight Time.

1. New details about Trump’s first meeting with Kim Jong Un
President Trump's first meeting with North Korean leader Kim Jong Un will be held one-on-one, according to a White House official.
While the White House update detailed the size of the meeting, the expected length of the meeting hasn't been released.
The official did not rule out the possibility that additional activities could be added to tomorrow's schedule, beyond the two planned meetings with Kim, ABC News' Jordyn Phelps reports.
Asked about a North Korean state media report that Trump and Kim were set to talk denuclearization and peace on the Korean peninsula, the official said the report is a hopeful indication.
"I think we should take some optimism from that reporting," the official said. "Given the history of the way KCNA has reported, I think that is a sign for optimism."

Trump himself seemed optimistic as well.
"We’ve got a very interesting meeting in particular tomorrow," Trump said at a luncheon with the Singapore prime minister on Monday. "I think things could work out very nicely. We appreciate your hospitality and professionalism and friendship."

2. Pompeo tweeting out some closed-door moments
Secretary of State Mike Pompeo's Twitter feed was busy during the first day of the summit, sharing photos of different meetings.
The first came early in the day, showing a glimpse of his morning briefing with Ambassador Sung Kim, the South Korean-born American diplomat who is the U.S. Ambassador to the Philippines. Kim has led the U.S. team at the demilitarized zone working on a joint communique with North Korea.

3. Trade still top of mind
Trump went from one global leadership summit to another this weekend, leaving the G-7 conference in Canada to fly to Singapore. And based on the tweets that Trump sent Monday morning, it doesn’t seem like he left his baggage from the first summit at the door.
After more than a day’s silence on Twitter, Trump posted four tweets about trade disagreements that were the talk of the G-7 conference, followed by a quick mention of the summit he is now attending -- writing “Great to be in Singapore, excitement in the air!” -- before turning back to tweeting about trade once more.
4. A big display with the summit host

While the main attraction of the summit will inevitably be the historic meeting between Trump and Kim, that wasn't the first world leader he met with on this trip.
He had his first formal meeting of the summit with the prime minister of Singapore, Lee Hsien Loong.
They first met one-on-one before expanding the group for a working lunch.

5. Celebrating early
There was a sweet ending to the working lunch: an early birthday cake for Trump.
The foreign minister of Singapore tweeted out a picture of the cake presented to Trump at the luncheon today in Singapore.
Trump was pictured with the cake, delivered three days before his actual birthday.