The curse of the World Cup Winners Continues: Germany crashes out of World Cup 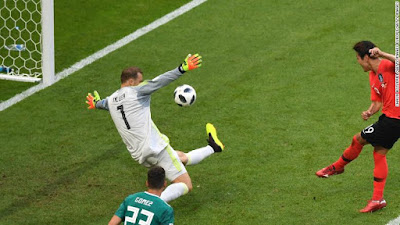 Germany became the third straight reigning champion to be knocked out in the group stage at the next World Cup -- following Italy and Spain -- after it was beaten 2-0 by South Korea in Group F.
It was only the second time in Germany's storied World Cup history that it had failed to progress from the first round and the last occurrence came in 1938.
South Korea made it 2-0 Germany
﻿