The 29 countries that approve of Trump over Obama 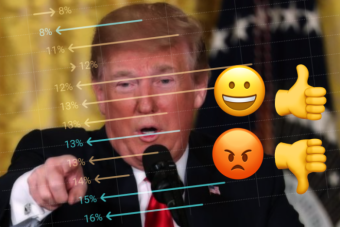 US President Donald Trump has proven a divisive leader not only at home, but also abroad.
Polling organisation Gallup asked groups of about 1,000 people in more than 100 countries if they approved of the president's leadership in 2016, when Barack Obama was president, and in 2017, after Mr Trump came to power.
In the vast majority of countries, approval ratings fell after Mr Trump was elected. There were large falls among traditional allies like Canada (down 40 per cent) and the UK (down 26 per cent). Australians approve of Mr Trump 31 per cent less than they did Mr Obama.
But approvals climbed in 29 countries, including Liberia (up 17 per cent), Israel (up 14 per cent) and Russia (up 6 per cent).
Views on US leadership fell in most countries after Trump's election
Per cent change in approval ratings for US president between 2016 and 2017

Countries where there was no change