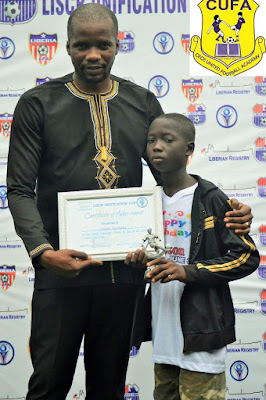 A fascinating tournament organized by LISCR football club ended in a classical fashion yesterday, June 5, 2018 at the Antoinette Tubman Stadium.

Cece United left back Isaac Harmon has been named MVP in the U15 category of 2018 LISCR unification cup after his side lost 3-0 to Sam Johnson Academy in the final.
Although the intelligent young left back team was defeated but his individual brilliance saw him collecting the most prestigious individual accolade ahead of many talented kids that took part in the competition.

LPRC Oilers in during the later minutes the match defeated their LFA second division counterpart Tony FC 2-1 in the senior category of the tournament while Sam Johnson Academy got a comfortable win 3-0 against Cece United Football Academy in the U15 category.