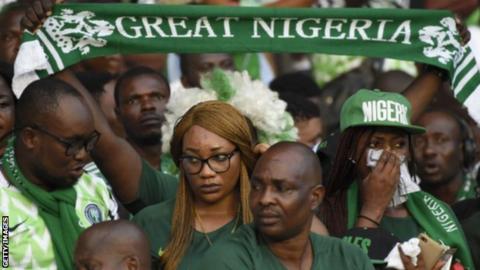 I don't know what to make of Nigeria's Lucky Chicken sage.  World Cup gave Nigeria fans thumbs down when it comes to entering the grounds with 'lucky' live chickens for their team's opening Group D game with Croatia on Saturday.
Supporters of the Super Eagles believe the tradition of taking chickens to games brings the team luck.
Russian government is not buying that, the government have banned the tradition from taking place when competing at their sixth World Cup, play in Kaliningrad (20:00 BST).
"Fans from Nigeria asked if it's possible to go to the stadium with a chicken. We told them that it is not possible," Andrei Ermak, minister of culture in Kaliningrad, told Russia's Interfax news agency. This is not the first time Nigeria fans have been banned from such practice, at the 2010 World Cup, Nigeria fans were banned from taking chickens painted in Nigeria's colours into Ellis Park, Johannesburg, for a game against Argentina.