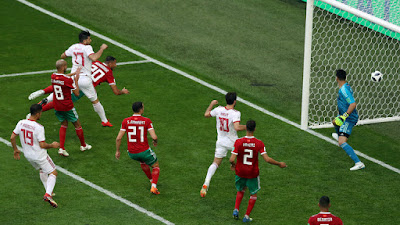 Lucky Iran just won its World Cup opener against Morocco, 1-0.  How lucky, as lucky as a last minute own goal in added time.
Trying to clear a last-second ball across the goalmouth, Aziz Bouhaddouz of Morocco dove for a header, and the ball went unerringly into the corner of his own net.
Well, both teams, especially Iran, engaged in a great deal of physical play, and numerous players from both sides hit the turf with injuries throughout.
While Morocco occasionally threatened to score, Iran failed to trouble the goal much at all, taking many of their shots from 40 yards or more and unsurprisingly failing to convert them.﻿