Who Will Be Top Goalscorer at the 2018 World Cup? 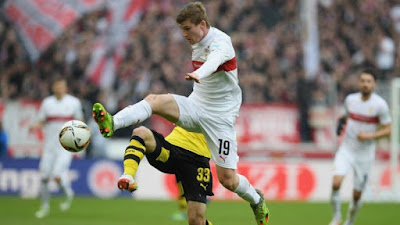 The 2018 World Cup starts this week with Russia and Saudi Arabia meeting in the opening matchup on June 14th at 11 a.m. ET. Check out Dan McGuire view on top players to look out for:

Rodriguez was available at incredible 300-1 odds to be top scorer at the 2014 World Cup. Even more surprising is the fact that Colombia were eliminated in the quarterfinals by Brazil, so he played in two fewer games than either of the Cup finalists (Argentina and Germany).

Bettors may be more keen to look at big longshots this summer after James’ incredible performance in 2014, but favorites did reign supreme in 2010, 2006 and 2002.

Neymar (10-1)
The Brazilian star unfortunately suffered an ankle injury while playing for PSG, but has been on the right track and fully healthy for the World Cup. Brazil are one of the favorites and expected to progress deep into the tournament, so his 10-1 odds make sense. Neymar’s certainly not a bad bet at all, but Brazil has an abundance of goalscorers that could took some away from him.

Leo Messi (11-1)
The Argentinian magician has the second-best odds at 11-1 to be top goalscorer at the World Cup. I don’t think the value is bad at all, but they can’t simply count on Messi to score all their goals and will need players such as Sergio Aguero, Paulo Dybala and Gonzalo Higuain to show up this tournament. With that said, Argentina are one of my picks to win it all so I expect them to get to the final and maximize the games played for Messi. In cases of a tie (players finish with the same number of goals scored), the tiebreaker goes to most assists. That certainly helps Messi as well, and I did take him to win the Golden Boot a few months back.

Antoine Griezmann (12-1)
Arguably France’s best goalscorer, Griezmann sits at 13-1 to be tops for the tournament. Griezmann has been averaging more than a goal every two games for Atletico Madrid, and I would strongly consider taking him if you like France.

Timo Werner (16-1)
The top German on the list is Timo Werner (pictured above) at 16-1 odds. The 22-year-old forward plays for RB Leipzig in the Bundesliga and will be an unpopular pick due to non-name recognition. However, Germany look poised to make another deep run in the tournament and he’s one of my picks at 16-1. Even though Germany is usually a very balanced squad up and down the roster, they seem to find a go-to goalscorer every World Cup, and Werner could be that player this summer.

Gabriel Jesus (16-1)
Another Brazilian is near the top of the list, and he may be a smarter selection than Neymar. Jesus is only 21 years old but has seen regular playing time on Premier League champions Manchester City. With playmakers all around him including Douglas Costa, Coutinho, and Paulinho, I don’t think Jesus is a bad bet at 16-1.

Harry Kane (16-1)
This is a pass for me since I don’t see England making it past the Round of 16, and his odds have moved from 12-1 to 16-1. He was also dealing with an ankle injury most of the spring although he should be fine for the World Cup. I’m a Harry Kane fan, and he’d have to be the go-to guy for England to make a deep run, but I just don’t see it.

Cristiano Ronaldo (18-1)
He’ll be a trendy pick and will try to score as much as possible, but I’m not sure Portugal will make a deep run so I’d pass. His odds were shaded for the first few months because of his popularity and was only offered at 12-1 odds.

Romelu Lukaku (18-1)
I’m high on Belgium this World Cup so I’m definitely keeping an eye on Romelu Lukaku’s odds. He had a pretty solid season at Manchester United despite playing in Jose Mourinho’s boring style, and has a ton of talent around him on the Belgian squad.


Eden Hazard (40-1)
Hazard’s ability to make something happen on his own from anywhere on the field has me keen on his 45-1 price. Belgium have underperformed in recent tournaments compared to their inflated expectations, but this may be the World Cup they finally put it all together, and Hazard will need to be a big factor.

Gonzalo Higuain (40-1)
Even though the reigning Golden Boot winner, James Rodriguez, made it only to the quarterfinals in 2014, it is prudent to back a player on a team that can make a deep run in June. Argentina should be able to cruise through their group in style, and that bodes well for the man they call ‘Pipita.’
Even though Higuain plays on the same team as the favorite to win the Golden Boot, I think that actually works toward the Juventus star’s favor as Messi will obviously command a ton of attention from opposing defenses and can pick out Higuain, who is a terrific finisher, with his otherworldly passing ability.
Argentina should create a lot of chances in every game and they’ve got the perfect player to clean up in front of the net. Higuain is a nifty little punt here in my opinion.    – Michael Leboff

Mo Salah (45-1)
Obviously the odds are not great that Egypt make a deep run, but it’s hard to ignore what Salah did at Liverpool this season. His odds were 66-1 in March and were down to 38-1 before suffering a shoulder injury in the Champions League Final. The hype surrounding Salah is real, I just hope we get to see him at 100% to prove it.

Mario Mandzukic (80-1)
Usually the hard part of finding a good deep World Cup sleeper is figuring out if they’re going to be on the field at all. Months ahead of time, many squads — even for the favorites — are considerably in flux. Mandzukic though is close to a lock to be Croatia’s starting center forward.
He led the team in goals during qualifying with five, he’s a regular starter (although often as an unconventional winger) for Juventus and he’s the perfect fit ahead of a stacked Croatian midfield, and aided by a traditional winger in Ivan Perisic. Add to that Croatia’s favorable group stage (Argentina, Iceland and Nigeria) and they at least have longshot quarterfinal potential. That’s a good deep sleeper mix.    – Michael Goodman

Christian Eriksen (100-1)
Eriksen needs no introduction. Tottenham Hotspur’s main playmaker is the standout superstar on an otherwise anonymous Denmark team. He scored 11 goals for Denmark during qualifying. His teammates scored 13.
Denmark lucked into a relatively easy draw in the World Cup, with France, Peru and Australia. And their quarter of the bracket is paired with the Argentina, Croatia, Iceland, Nigeria group, meaning that they’re only one or two weird results away from a path to the quarterfinals. The odds of it happening might be slim, but if Denmark overachieve it’ll be because Eriksen puts them on his back.    – Michael Goodman

Michy Batshuayi (125-1)
I love Belgium’s Batshuayi, I just don’t know how much playing time he’ll manage to get. There are a couple group games with goals expected (vs. Panama, vs. Tunisia), and if he starts the knockout stages he could have a real chance. At 125-1, I’d be absolutely fine throwing a few bucks on him, especially if you’re already high on Belgium.