Jay-Z & Beyonce's "Everything Is Love:" Album - The Lyrics Tho 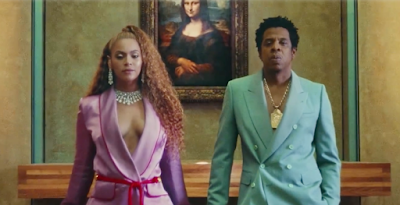 The Carters are a global superpower couple.   Their first release as a couple is making waves all over the media, as it should. The went deep and honest with their lyrics.  Given the widely publicized relationship drama that rocked the internet, it is clear that olive branches were extended, and peace had been reached among the Carter family. From the ashes came an even stronger bond. Everything Is Love, is evidence of this bond they share. Part victory lap, part happy ending, part kids-gone-to-bed-so-let's-have-fun, The Carter's first effort as a couple finds both artists putting fun first.
With that in mind, we figured it would be appropriate to unpack the lyrics. On that note, here are some of the most notable lines from Everything Is Love.

You'd rather play the game than to throw the fight
Boy you know that ain't right
When I’m needing your affection, I need that attention
Up and down motion, come swim in my ocean
- Beyonce
I don't have no concept of time
Even with a rose gold Concept on me
I remember summer nights in the projects
Bullet rounds interrupting my Chi
When the worst thing that could happen
Zipped up his jacket and ran back down the street
In Bel-Air only the nights get cold
I wrapped a yellow jacket around Bey
It's not lost on me, music has my kids sound asleep
- Jay-Z

Gimme my check, put some respeck on my check
Or pay me in equity, pay me in equity
Or watch me reverse out the debt (skrrt)
He got a bad bitch, bad bitch
We live it lavish, lavish
I got expensive fabrics
I got expensive habits
- Beyonce
I said no to the Superbowl: you need me, I don't need you
Every night we in the endzone, tell the NFL we in stadiums too
Last night was a fuckin' zoo
Stagedivin' in a pool of people
Ran through Liverpool like a fuckin' Beatle
Smoke gorilla glue like it's fuckin' legal
Tell the Grammy's fuck that 0 for 8 shit
Have you ever seen the crowd goin' apeshit?
- Jay-Z

No cap, false, n***a, you not a boss, you got a boss
N***as getting jerked, that shit hurts, I take it personally
N***as rather work for the man than to work with me
Just so they can pretend they on my level, that shit is irkin' to me
Pride always goeth before the fall, almost certainly
It's disturbing what I gross
Survey says you not even close
Everybody's bosses 'til it's time to pay for the office
'TIl them invoices separate the men from the boys, over here
We measure success by how many people successful next to you
Here we say you broke if everybody gets broke except for you
- Jay-Z
Ain't nothing to it, I boss so I bought my momma a whip
My great-great-grandchildren already rich
That's a lot of brown chi'r'en on your Forbes list
Probably looking around my compound on my fortress, boss
I be ridin' around with my seat reclining
Droppin' my daughter off at school every morning
We slammin' car doors, I be true balling on these bum whores
- Beyonce

I play on these planes, y'all catch me in traffic
Y'all drag me in court for that shit, y'all backwards
After all these years of drug trafficking, huh
Time to remind me I'm Black again, huh?
All this talking back, I'm too arrogant, huh?
- Jay-Z
Patiently waiting for my demise
'Cause my success can't be quantified
If I gave two fucks - two fucks about streaming numbers
Would have put Lemonade up on Spotify
Fuck you, fuck you, you're cool, fuck you, I'm out (Ah!)
I ain't never seen a ceiling in my whole life, that's word to Blue
Freestyling live, blueprint from my Jigga who never writes
- Beyonce

We played it cool at the pool of the Cancun, VMA
Confidence you exude make the fools stay away
Me, I played my room, let the fools have they say
Fate had me sittin' next to you on the plane
And I knew straight away, uh
The next time we would speak was like two years away
You had a man, you shut it down until you two had a break
I bet that dude rued the day
You kept me up on the phone while you were away
You came back, I let you set the date, Nobu on the plate
I brought my dude to play it cool, my first foolish mistake
- Jay-Z
&
To all the good girls that love hustlers
To the mothers that put up with us
To all the babies that suffered 'cause us
We only know love because of ya
America is a motherfucka to us, lock us up, shoot us
Shoot our self-esteem down, we don't deserve true love
Black queen, you rescued us, you rescued us, rescued us
- Jay-Z

Tight circle, no squares, I'm geometrically opposed to you
Y'all like to try angles, y'all like to troll, do you?
Y'all talk around hoes, do you? Y'all don't follow codes do you?
You know everything you say from n***as close to you
You emotional; when I say free the dogs, I free 'em
That's how Meek got his freedom
Y'all put n***as on a t-shirt, it hurts you ain't never meet 'em
You got n****s in the feds, you ain't even tryna feed 'em
I'm tryna free the world, that's how deep I'm in
I ain't goin' to nobody nothin' when me and my wife beefin'
I don't care if the house on fire, I'm dyin', n***a, I ain't leavin'
Ty-Ty take care of my kids, after he done grievin'
If y'all don't understand that, we ain't meant to be friends
- Jay-Z

Extra magazine hopped on a jet with my Ebony chick
Blacker than the Essence fest
The behind the back pass is so effortless
LeBron James to you Omaroses
Dapper Dan at 4AM, shit, I am the culture
I made my own waves so now they’re anti-Tidal
I’m livin' the no sock life despite you
Since the Khalif doc, they've been at my neck
Y'all can tell 'em Trayvon is comin' next
- Jay-Z

He went to Jared, I went to Chaumet out in Paris
Yeah, you fucked up the first stone, we had to get remarried
Yo, chill man
We keepin' it real with these people, right?
Lucky I ain't kill you when I met that b...
Y'all know how I met her, we broke up and got back together
To get her back, I had to sweat her
- Beyonce & Jay-Z
Baby, the ups and downs are worth it
Long way to go, but we'll work it
We're flawed but we're still perfect for each other
Sometimes I thought we'd never see the light
Went through hell with heaven on our side
This beach ain't always been no paradise
But nightmares only last one night﻿