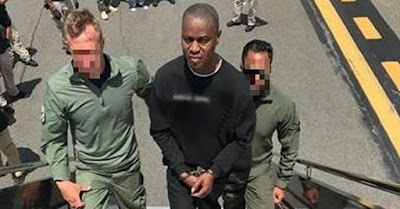 A Liberian national, who served as a bodyguard to former Liberian President Charles Taylor and was a member of a paramilitary police unit called the Secret Security Service (SSS), was returned to Liberia on June 19 by U.S. Immigration and Customs Enforcement's (ICE) Enforcement and Removal Operations (ERO) deportation officers.
An ICE investigation revealed that prior to coming to the United States, Cooper, while a member of the SSS and the National Patriotic Front of Liberia, was directly involved in the persecution of civilians in Liberia.


“This individual is a human rights violator.  He was a member of an organization known for setting fires to whole villages, and it is because of the diligence of ICE and its officers that this man is no longer living comfortably within our communities,” said Thomas Decker, field office director for ERO New York.  “It is important to note that the safety of the public is our top priority, and ICE continues to target criminal aliens taking refuge in our cities after having committed crimes in their home country.”


ERO deportation officers escorted Charles Cooper, 45, who was removed from the United States via an ICE Air Operations Charter flight and transferred into the custody of Liberian law enforcement authorities upon arrival to the capital of Monrovia.
In January 2006, Cooper entered the United States as a nonimmigrant visitor, with authorization to remain in the United States until August 2006. Cooper failed to depart the United States as required. In December 2006, Cooper was placed into removal proceedings.
On Aug. 11, 2014, Cooper was ordered removed by an immigration judge in Baltimore, Maryland, and appealed that decision to the Board of Immigration Appeals (BIA). On Feb. 9, 2016, the BIA dismissed the appeal. On Aug. 11, 2017, Cooper was arrested by the New York Police Department, and charged with DWI. On that same date, ERO deportation officers lodged an immigration detainer with the NYPD’s Richmond Central Booking. Cooper was released from NYPD custody, without the detainer being honored and without notification to ICE. On May 5, 2018, ERO deportation officers arrested Cooper in Staten Island, New York, paving the way for his removal.
This case was litigated by ICE’s Baltimore Office of Chief Counsel with the support of the Human Rights Law Section and the Immigration Law and Practice Division and was supported by ICE’s Human Rights Violators and War Crimes Center (HRVWCC). Established in 2009, the HRVWCC, furthers ICE’s efforts to identify, locate and prosecute human rights abusers in the United States, including those who are known or suspected to have participated in persecution, war crimes, genocide, torture, extrajudicial killings, female genital mutilation and the use or recruitment of child soldiers. The HRVWCC leverages the expertise of a select group of agents, lawyers, intelligence and research specialists, historians and analysts who direct the agency’s broader enforcement efforts against these offenders.
Since 2003, ICE has arrested more than 410 individuals for human rights-related violations of the law under various criminal and/or immigration statutes. During that same period, ICE obtained deportation orders against and physically removed 908 known or suspected human rights violators from the United States.  Additionally, ICE has facilitated the departure of an additional 122 such individuals from the United States.
Currently, HSI has more than 135 active investigations into suspected human rights violators and is pursuing more than 1,750 leads and removals cases involving suspected human rights violators from 95 different countries. Since 2003, the Human Rights Violators and War Crimes Center has issued more than 75,000 lookouts for individuals from more than 110 countries and stopped over 260 human rights violators and war crimes suspects from entering the U.S.﻿