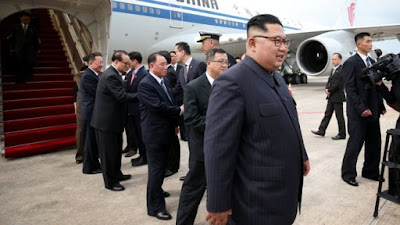 SINGAPORE — President Trump arrived here Sunday night ahead of a potentially historic summit with North Korean leader Kim Jong Un, the first meeting between the leaders of two countries that have been sworn enemies for almost seven decades.
Air Force One touched down with little fanfare at Paya Lebar Air Base in Singapore, landing a few hours after Kim arrived in the island state. Trump waved as he stepped off the presidential aircraft, briefly greeted Singaporean officials on the tarmac and quickly climbed into a limousine to head to his hotel for the evening.
Asked upon his arrival how he was feeling about the summit, Trump told reporters, “Very good.”

Trump and Kim are scheduled to meet face-to-face Tuesday morning, and it remains far from clear what kind of agreement on North Korea’s nuclear program the two leaders will be able to forge.
Trump was upbeat as he departed Canada on Saturday for his day-long journey halfway around the globe, which included a refueling stop on the Greek island of Crete. The president told reporters he would rely on his intuition to size up Kim’s intentions regarding a deal to abandon his nuclear arsenal.
“Within the first minute, I’ll know,” he said. “My touch, my feel — that’s what I do.”
Singapore’s prime minister, Lee Hsien Loong, welcomed Kim and his entourage to the Istana, his palatial office, for talks laying the groundwork for Tuesday’s summit. Trump is due to meet with Lee on Monday.
“From our point of view, it’s important that the meeting take place and that the meeting sets developments on a new trajectory — one that will be conducive to the security and stability of the region,” Lee told reporters here earlier in the afternoon.
Kim and Trump will sit down for talks at 9 a.m. Tuesday at the Capella Hotel on the resort island of Sentosa, usually better known for hosting Singapore’s Universal Studios amusement park.
Video broadcast by the prime minister’s office showed Kim and Lee shaking hands and posing for photos at the Istana on Sunday evening. Kim could then be seen introducing Lee to his senior officials, while his sister and close aide, Kim Yo Jong, could be seen in the background.
The North Korean leader landed at Singapore’s Changi airport shortly before 3 p.m. local time Sunday and traveled in his armored Mercedes-Benz limousine through one of the island state’s swankiest shopping districts to the five-star St. Regis Hotel.
The streets were lined with tourists and journalists trying to catch a glimpse of the enigmatic North Korean leader, who has embarked on his farthest journey since taking power at the end of 2011 — and the journey with the highest stakes.

Kim has engaged in a flurry of diplomacy this year, holding two meetings with South Korean President Moon Jae-in and two with China’s Xi Jinping, leading to this first-ever summit between a North Korean leader and a sitting U.S. president.
After overseeing rapid advances in North Korea’s nuclear and missile technology last year, Kim now appears to be turning his attention to his country’s economy and particularly to getting rid of the international sanctions that are hampering its growth.
The nuclear program has enabled Kim to project confidence, analysts say, and he is now trying to metamorphose from a nuclear-armed tyrant into a responsible international statesman.
Kim’s 3,000-mile journey from North Korea was full of intrigue, with three planes departing from Pyongyang on Sunday morning.
The first was a cargo plane believed to be carrying vehicles and supplies for the North Korean leader.
The second was an Air China Boeing 747, usually used by the Chinese government to carry high-level officials, that took off at 8:30 a.m., about an hour after it arrived from Beijing.
Then Kim’s private jet, a Soviet-made Ilyushin-62, officially called “Chammae-1” after North Korea’s national bird but sometimes jokingly referred to as “Air Force Un,” departed at about 10 a.m. local time.
Kim had taken this third plane when he traveled to the Chinese city of Dalian in May to meet President Xi Jinping, a trip that was viewed as a practice run for the Singapore journey.
But Kim was in fact on the Air China plane, despite the fact that Singapore, which is 3,000 miles from Pyongyang, was technically within reach of his jet, which can fly 6,200 miles.
His sister, Kim Yo Jong, arrived in Singapore on the North Korean jet about an hour after her brother.
Commentators in South Korea speculated that this was part of an effort to create a decoy so that no one — not even the Chinese — knew which plane the North Korean leader was traveling on.
Kim Jong Un was greeted at Changi Airport by Foreign Minister Vivian Balakrishnan, who had just returned from a five-day trip to Washington and Pyongyang.
The North Korean leader was accompanied by officials including Kim Yong Chol, a top aide who delivered a letter to Trump in the White House earlier this month; Ri Su Yong, who is in charge of international relations in the ruling communist Workers’ Party and was ambassador to Switzerland while Kim Jong Un was at school there; and foreign minister Ri Yong Ho.
Television footage showed they traveled from the airport in a large convey of vehicles with a heavy police guard.
Kim Jong Un appeared to be in a black Mercedes-Benz stretch limousine like the one he used for the inter-Korean summit in April. Although he was not visible through the black tinted windows, the car was flying a North Korean flag and the ensign of North Korea’s State Affairs Commission, of which Kim is the chairman.
The leader went straight to the St. Regis Hotel, a place that his older half brother, Kim Jong Nam, was known to frequent. Kim Jong Nam, who lived in Macau, was killed in a chemical weapon attack in Kuala Lumpur airport last year — an assassination widely believed to have been ordered by Kim Jong Un to eliminate a potential rival for power.
The 3,600-square-foot presidential suite at the St. Regis goes for about $8,000 a night. It has its own private gym and Jacuzzi, a baby grand piano, custom-made Czech crystal chandeliers and art works including a Marc Chagall painting.
It is not clear who is picking up the tab for Kim Jong Un’s stay.
Singapore’s prime minister has said his government is spending about $15 million in total on hosting the summit, but he did not say whether this included hosting the North Korean leader.
The White House had been exploring whether the United States could or should cover the costs for Kim Jong Un to attend the summit.
Security was tight outside the hotel, with all cars being inspected and curtains and large potted plants shielding the entrance.
Only guests were being allowed into the hotel, and both Singaporean police and North Korean guards were keeping watch.
Two reporters from KBS, the South Korean public broadcasting channel, were expelled from Singapore after being detained on suspicion of entering the North Korean ambassador’s residence in Singapore on Saturday.

Kim Jong Un, who came to power in North Korea at the age of 27 with no qualifications other than being born into the totalitarian family that has ruled the state with an iron grip since 1948, has shown eagerness for this summit.
After Trump abruptly called off the summit late last month, citing North Korea’s “tremendous anger,” the Kim regime immediately made clear it still wanted to talk and hurriedly arranged a second face-to-face meeting between Kim Jong Un and South Korea’s Moon to get the preparations back on track.
Departing from Canada, where he had been attending a G-7 meeting, Trump signaled that he had high hopes that Kim would deliver.
“I think that he’s going to surprise on the upside, very much on the upside, we’ll see,” Trump said at a news conference in Quebec on Saturday. “But this has never been done, never been tested.”
Trump had been trying to lower expectations, saying that he wanted at a minimum to “start a dialogue” with Kim and acknowledging that this would be a process, not a quick diplomatic success.
The summit will tackle of the thorny issue of North Korea’s nuclear program, a problem that has bedeviled diplomats for a quarter-century and has become only more difficult with the astonishing advances of last year.
But the concerted efforts to reduce expectations suggested that the summit would go smoothly, said Joseph Yun, who was the State Department’s point man on North Korea until February.
“If it’s just a meet-and-greet — a ‘getting to know you’ as Trump would say — then it will still be welcome in the region, in Singapore and in South Korea and in Japan,” Yun said.
But the United States would be seeking a commitment to denuclearization — North Korea agreeing to get rid of all its fissile material and intercontinental ballistic missiles — while Kim would want a pledge to end the Korean War and assurances about his security.
“If we get that, we will have a successful summit kicking off the diplomatic process,” Yun said.
The Korean War ended in an armistice, not a peace treaty, in 1953, and that agreement was signed by North Korea and China on one side, and the United States on behalf of the United Nations on the other.
Balakrishnan, the Singaporean foreign minister, said that during his meetings in Pyongyang and Washington he saw “sincerity” and a desire from both sides to make the summit a success.
“I see a desire, a willingness to escape the constraints that have applied for the last seven decades — so with goodwill and creativity, let's see what they come up with,” he told reporters after flying from Pyongyang to Beijing on Saturday.