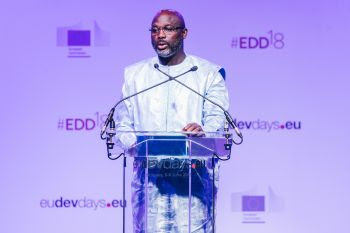 Brussels, Belgium: President George Mannah Weah has applauded the European Union (EU) for dedicating this year’s European Development Day (EDD) Summit to the development of women and girls.
Delivering a speech on Tuesday, June 5, 2018 at the EDD Summit in Brussels, Belgium, the Liberian Leader recognized the progress made by the EU to achieve gender equality, but emphasized that much still needs to be done to confront the challenges.
“In today’s evolving world, there has been major progress made in some countries with the gender equality. However, in other countries, the rights of women and girls remain a major challenge; especially in developing countries,” the President noted.
The Liberian Leader said it would be difficult to achieve total development and meaningful growth when women and girls are not captured into national plans, and/or are excluded from participating in economic activities.
“How can we maintain peace and stability, if our women and girls are being raped and abused,” the President averred. According to President Weah, in spite of global efforts to close economic gabs, eradication of gender-based violence still remains a major problem especially among young people.
“In my own country Liberia, issues of gender equality, sexual abuse and violence continue to be a major challenge. As President of Liberia, it is my responsibility to lead the efforts to address and rectify these glaring disparities in our social and economic environment. But beyond that, I will like to inform you that my commitment and dedication to this cause is also on a personal level. It comes from deep and longstanding appreciation and respect for the value of women and girls in our society which I incurred through my childhood upbringing.”
He also used the opportunity to share the story of his upbringing by his paternal grandmother in Gibraltar, Clara Town.
“I was raised by my grandmother in one of the poorest ghettos in Liberia and under very difficult circumstances, yet she was always strong in her conviction that she was not deterred or defeated by these adversities. She never wavered in her beliefs that she could make something out of living and she never gave up hope in her beliefs that she could win, despite of all the odds,” the Liberian leader reflected.
“I am a product of her belief and teaching, many of which remain with me even up to this day. I will never forget the lessons she taught me,” he added.
Though the country enjoys several years of uninterrupted peace, the Liberian leader intoned that the impact of the crisis on women and girls continue to be felt, as they are finding it more difficult than the rest of the population. He however pledged to make women and girls empowerment a priority of his administration as the country moves forward.
“The return of stability and democratic governance has provided the space to roll out national program to address these challenges, bearing in mind that Liberia cannot fulfill its development objectives if the development of women is ignored as women constitute more than 50% of the population,” President Weah noted.
“As a national leader, I am convinced that one of the most effective strategies to correct these situations is to take affirmative action in the interest of women and girls, such that they enjoy greater participation in national leadership. This is why, for example, when the National Election Commission (NEC) required each political party a minimum of 30% of women candidature in parliamentary election, I raised the bar for my party to 50%; and I am proud to inform you that all of those women who had the courage to run were all successful.”
The President also said he demonstrated his commitment to women political participation when he chose a woman as his running-mate from a short list of possible candidates. “I have also appointed a woman to be the first female Deputy Chief of Staff of the Armed Forces of Liberia (AFL) and also a female as Deputy Inspector General of the Liberia National Police,” he told the audience.
He pledged to conduct a comprehensive review of laws to highlight and eliminate clauses that are obviously against the women of Liberia.
This year’s EDD Summit is being held under the theme “Women and Girls at the forefront of Sustainable Development: Protect, Empower and Invest.”