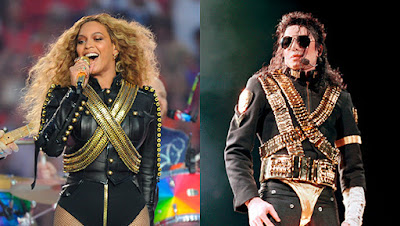 Beyonce or Michael Jackson? That’s the question fans were trying to answer in a friendly Twitter battle that was trying to determine which talented singer is the greatest of all-time. Many of the passionate users not only named their choice but also backed it up with legit reasons for their opinions. Whether you’re a part of the Beyhive or an MJ fan for life, you can bet that you’ll be able to relate to some of the loyal reactions some users had when it came time to choosing one over the other. Beyonce just put on an epic performance at Coachella and Michael’s known for all his incredible performances when he was alive, so who is considered the greatest?


Some users stuck with one answer while others agreed that they’re both legends and there’s really no way to compare them. “Beyoncé is not the Michael Jackson of this generation. Beyoncé is not better than Michael Jackson. Michael Jackson is Michael Jackson, Beyoncé is Beyoncé. They both are legends. You don’t compare legends to each other,” one user tweeted. Another was on the king of pop’s side when she tweeted, “Beyoncè said nobody compares to Michael Jackson herself so idk why y’all go through these gymnastics to prove otherwise.”
One of Bey’s fans also showed support by choosing her over MJ. “michael jackson’s fans can camp out in my mentions all f*****g day, I said what I said. BEYONCÉ IS THE GREATEST PERFORMER OF ALL TIME” and another user really stirred things up with MJ fans with a tweet that read, “Beyoncé is a better performer than Michael Jackson & Janet Jackson. There I said it. I’m about to mute this tweet. Y’all can argue with oxygen for all I care, if still won’t change the FACTS.”

No matter who takes the cake for the greatest of all-time, we have to admit that both Beyonce and Michael fans truly love their icons and are ready to show their support whenever it’s needed!