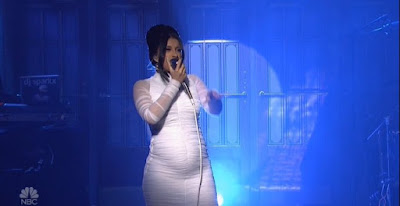 It's Official. Just one day after dropping  Invasion of Privacy album, Cardi B has finally confirm her pregnancy.
It was during her performance as the musical guest on this weekend’s airing of Saturday Night Live, hosted by Chadwick Boseman, that the Bronx superstar slid on a form fitting white dress that revealed a growing baby bump. The outfit didn’t appear until Cardi’s second appearance onstage. She first came out rocking the same getup seen on the cover of her album, where a feathered adornment covered most of her body.

According to reports, Cardi is said to be seven months pregnant with her first child with fiancé Offset of Migos. While Offset has two other children from previous relationships, there’s no telling whether or not this will be his third or fourth child following a spike in controversy when Celina Powell pegged the North Atlanta emcee as the father of her recent newborn.
Regardless of the outcome, congratulations are in order for the hip-hop power couple who have been a confirmed item since last year.