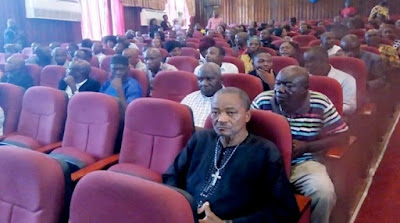 Friends and family members of fallen Liberian journalist Kamara Abdullai Kamara converged on Friday, April 20, 2018 at the Monrovia City Hall to memorialize his life.
Amongst those attending the ceremony were President George Manneh Weah, House Speaker Bhofal Chambers, Senator Commany B. Wesseh and officials of the UN, ECOWAS, civil society organizations, and the Muslim community.
An endowment fund was also launched to cater to the family, while President Weah promised to shoulder the responsibility of caring for the kids of the fallen journalist.
Kamara, popularly known as KAK by his media colleagues, suddenly died on Tuesday, April 17 at the Phebe Hospital in Bong County. The cause of his death is still undisclosed but doctors said he was brought to the hospital "unconscious."Stanley Kamara, elder brother of KAK, said he “lived a very short but popular life”.
Famous for his meekness and tolerance as a devoted Muslim, KAK led the Press Union of Liberia for two years, implementing several media development projects in the country.
He was a massive advocate of free speech and unwaveringly pushed for the decriminalization of speech in Liberia.
Speaker Chambers, in his tribute, called for support for the family of KAK, saying, “the peace that will make his soul rest is the care that will be given to his family, so we should all do justice to peace.”
Paying tribute on behalf of the Liberian government, Deputy Minister of the Ministry of Foreign Affairs, Elisa Shoniyin described the demise of KAK as a “regrettable monumental loss”.
Shoniyin emphasized that the government remains “true to free press and free speech under the leadership of President George Manneh Weah.”
An official of ECOWAS, who recounted the work of Kamara for the transitioning of UNMIL Radio to ECOWAS, said his death is a “big blow to West Africa”.