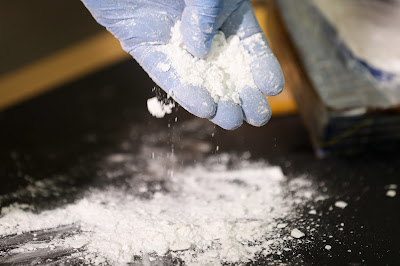 A doctor has been arrested for allegedly killing a woman by sprinkling cocaine on his penis before she performed oral sex on him.
Dr Andreas Niederbichler, from Germany, is also being investigated for giving three other women cocaine while having sex, although these women have said they were not harmed.
Police have said they believe the 42-year-old doctor had put some of the drug onto his penis before the woman performed oral sex, reports the Daily Mail.

The 38-year-old woman collapsed at the doctor's apartment in Halberstadt and was rushed into hospital via ambulance, but she died shortly after she was admitted.
He has reportedly been charged with bodily harm leading to death and is being held in a secure drug dependency unit where he's receiving help for a drug addiction.
Prosecutors claim Niederbichler gave her the cocaine without her knowing.
Chief prosecutor Hal Roggenbuck said: "The victims who have been heard so far have all indicated that they have been ill at the meetings.
"All of them showed reactions due to the use of narcotics."
According to the Daily Mail, the doctor is an expert in reconstructive and plastic surgery and is well-respected within the industry.