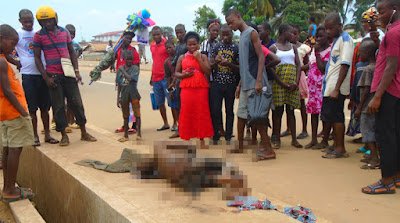 The naked body of Saah Kpakar was found at  Chicken Soup Factory Junction on Saturday, April 21, 2018.
The victim body was found naked with burnt cloth tied around his waist and sores all over his body.
According to community members, the deceased was a notorious criminal who harassed peaceful citizens often, especially during the night hours.
They said his constant harassment and hijacking of people’s properties (phone, watch among others thing) led to his death on Saturday morning after he stabbed a neighbor on his neck and attempted to snatch away his phone.
According to them, the deceased was beaten to death by angry crowd who were on the scene after his failed robbery.