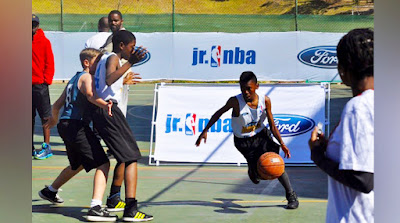 Ten thousand kids in Liberia have been identified to participate in the Junior National Basketball Association program that was recently launched in the country on April 12, 2018.

Junior NBA is the global youth participation program for boys and girls intends to teach the fundamental skills and core values of the game at the grassroots level to help improve the youth basketball experience for players, coaches and parents.
The program officially kicked off  at the American International School in the Old Road community, with exhibition matches involving over 100 selected kids in the presence of President George Weah and his wife Clar Weah who expressed joy seeing kids displaying their talents.
Speaking to reporters at the launch, the Vice President and Managing Director for Africa, Amadou Gallo Fall, said the program coming to Liberia was as a result of consultations with President Weah.
“After nearly three years of consultations, exploration and forward discussion we are excited about this outcome,” he said.
He disclosed that following a productive meeting in March of 2018 with the President and the First lady in Paris, France hosted by French President Emmanuel Macorn, the program has come to Liberia.
Fall said program is committed to developing sports education and youth development programs for both boys and girls between the ages of six to 18 years by culminating with Jr. NBA league and inter-scholastic and community basketball league featuring NBA modelled team from communities and schools that will participate in the Jr. NBA program.
The league will run throughout the academic school year with over 250 games with an objective of targeting approximately 10, 000 kids, coaches and parents over the season.
The program will renovate existing and iconic outdoor and indoor basketball courts in Monrovia while new facilities will be built to encourage more kids to play the sport.
President Weah said his government is committed to developing sports in the country and basketball is no expectation.
The Liberia leader, who is a former sports icon, is of the conviction that supporting   basketball from the grassroot is key to a successful basketball national team for Liberia.
He appreciated Junior NBA for identifying Liberia to invest in the feature generation of the country.