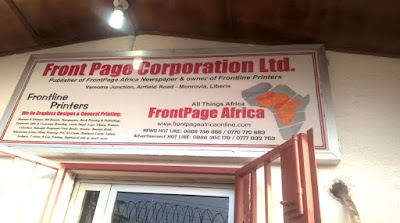 According to the President of the Republic of Liberia, Mr. Rodney D. Sieh was paid US$10, 000 for publicity during the 2017 elections campaign.  The Managing Editor of FrontPage Africa Newspaper, Mr. Rodney D. Sieh, is saying President George Manneh Weah lied when he made that statement.

Rodney: “Had I been in such a meeting Or invited to it, I would would have stood up to him and let him know that he is a born liar. The last time I laid eyes on Mr. Weah was when I was lying in the hospital bed in JFK during my 2013 prison saga when he came to show support.
Prior to that was a 2005 interview I conducted with him in Washington, DC during which he stated that he was a French Citizen.
At the time when several people including some of his opponents in the race prevailed on me to release the audio of that recording on grounds that it could keep him from contesting I refused because of the potential for resentment from Mr. Weah’s supporters.
Besides those two encounters I have never sat in the same space or spoken to Mr. Weah except for one time during the elections when he called from an unknown number and asked me to please help him with his campaign.
I made it clear to him that I was not taking any sides in the elections but that we would cover his rallies as we were already doing with he and all the other candidates.
There was no discussion regarding any payment of any kind, and neither did Mr. Weah make such either through him or an intermediary.
I find it very disturbing that the President of a nation would make such claim in my absence and without an invitation to attend his meeting with Media execs.
Besides our newspaper came under numerous attacks during the campaign and he and his supporters made accusations that we were not writing favorable stories about him just as they are doing now.
In fact, it was our newspaper that has been behind most of the major investigative stories regarding Mr. Weah in the past few years even after he visited me in the hospital during my prison ordeal.
A simple google search will find out investigative stories about allegations in the FIFA probe, his child support issues in the USA and the link to former President Charles Taylor.
Mr. Weah should ask himself whether if he had made such a payment as he alleges would we have reported all those stories he and his supporters describe as bad and negative stories?
I am taking this matter very seriously will pursue defamation and legal routes to force the President to produce a recording or receipt or photographs of this alleged transaction where he supposedly made such a payment.
The President is obviously being misled into a really foolish mistake on a bid to deter us from doing our investigative work, particularly regarding his refusal to declare his assets, his various construction schemes and the money laundering scheme regarding the $US536 Million Loan they are trying to process with Asian conglomerates.
President Weah must hear me and hear me well, no amount of intimidation, threats of arson by his supporters and social media attacks which have included the creation of fake Facebook profiles and WhatsApp messages bearing my name will deter me and my newspaper from our investigative work.
The President has told a bold face lie bordering that of a criminal and Liberia should be worried about this trend and the direction we are headed.”

Who do you believe?