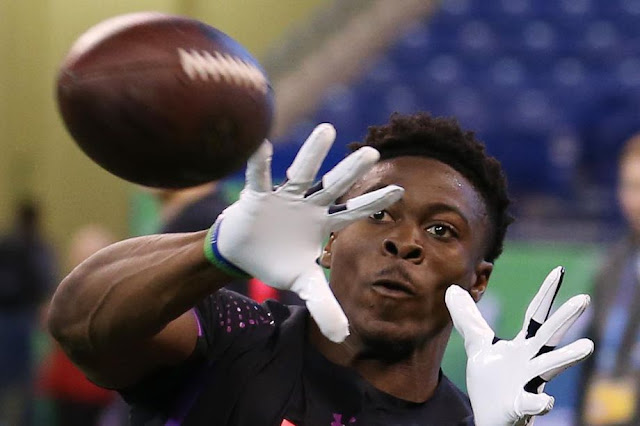 
Few prospects ever have come from more accomplished athletic families.

He’s the cousin of Tim Weah, a rising star in the U.S. Men’s National Team program, and George Weah Jr., a former A.C. Milan midfielder, but Jester is the one carrying the family torch in this kind of football.
Tim’s father and Jester’s uncle, George Weah, is the only African player to ever win the Ballon d’Or, an honor meant for the world’s best soccer player in a given year.


Jester’s stayed close to Liberia, even though he grew up in the United States and has never visited.

Jester was born in Minneapolis and grew up in Madison, Wisconsin, where his mother built a career as a nurse. His parents separated when he was young. While he was in elementary school, his father, James, remarried. George attended the wedding in Madison.
“At the time, I didn’t think he was like a big deal,” Jester told SB Nation. “As I started to get older, everyone would talk about him once they’d see my last name. ‘Oh, your uncle is George Weah this, George Weah that?’”
George has spent part of his life in the United States, as well as in European cities amid his soccer career. Jester and Tim have never met in person, but Jester figures they’ll cross paths at some point.

Jester’s current goal: Make a name for himself as a professional receiver.

Weah is a burner, and the most notable thing about his game is that he can do this to people:
“It’s definitely a big part, catching the deep ball. But I look at myself as more than just being a deep threat,” he says. “I feel like I’m a four-down receiver. I can be used in many different ways, and my body structure and my size and speed, I’ll just leave up to the coach to do whatever he wants to do with me.”
Weah played under two coaching staffs and four offensive coordinators at Pitt. He’s played under coaches more known for the classic college spread and others whose systems are built on traditional pro-style concepts.
“I feel comfortable learning any playbook as long as I put my mind to it,” he says. “I feel confident I can fit in with any offense, whatever an offensive coordinator throws my way.”

Jester said visiting Liberia is “on my bucket list.”

Both his parents are from there, and he’s stayed close through stories from his mother and lots of Liberian dishes. His favorites are potato greens and jollof rice, two specialties of his mom’s.
“I’m a hundred percent African. I take pride in my culture, and I’m proud of my background,” Jester says. “I love the food. Whatever my mom makes, and my aunts and uncles, whatever they make. Even my grandma growing up, Liberian food is second to none. It’s by far one of my favorite.
“I definitely feel Liberia’s a big part of my life. I’m proud of where my family came from, my family tradition. I definitely take big pride in that.”