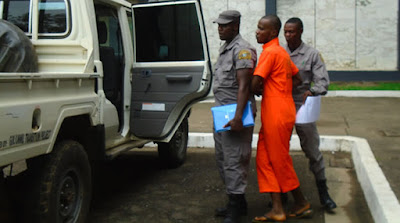 A 29-year-old man identified as Chris L. Better has been found guilty and sentenced to prison for 10 years for killing a 31-year-old woman identified as Kristle Pati Togbah at the Clear View Entertainment Center in Duport Road on Sunday, November 27, 2016.

Better was sentenced on Monday, April 2 by Judge Roosevelt Z. Willie, Presiding Circuit Court Judge assigned at Criminal Court ‘A’ at the Temple of Justice in Monrovia.
“In view of the foregoing facts and circumstances coupled with the laws cited above, we hereby confirm and affirm the unanimous guilty verdict of the petit jury for the crime of murder against Defendant Chris L. Better,” Judge Willie asserted.
Defendant Chris Better was indicted by the Grand Jury of Montserrado County during the November A.D 2017 Term of court with the crime of murder for knowingly, willingly and intentionally stabbing victim Kristle Togbah with a knife on her lower waist.
According to the final ruling, Better admitted to stabbing the victim on her lower waist with a knife he usually travels with for his protection.
Better was convicted of murder in accordance with Section 14.1 of the revised Penal Code of Liberia.
Section 14.1 of the revised Penal Code states: “A person is guilty of murder if he purposely or knowingly causes the death of another person or human being”
The court’s findings further revealed that Better had never been involved in any criminal act or reported to any police station for any crime prior to his incarceration.
Convict Better is a Liberian, resident of the Joe Bar Community in Paynesville and student of the Stella Marie Polytechnic School studying Engineering.
Report by Augustine T. Tweh
﻿