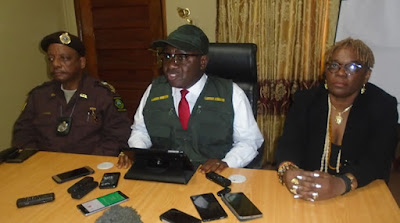 A joint inspection team comprising the Liberia Immigration Service, Liberia Revenue Authority and the Ministry of Labor is expected to embark on a month long inspection of various firms to ensure employers are complying with the laws.
“In line with the Decent Work Act; regulation Number 17, pass in 2009, if you are an employer, employees or self-employed Alien, and did not regularized your work permit, and you are booked by this joint team, you are going to pay 2,000 United States Dollars plus the usual 1,000 making it US$ 3,000 in all,” Labor Minister Moses Y. Kollie told reporters Monday.
The inspection team includes 16 persons from the MOL, LIS, and eight others from the LRA.
In the wake of the exercise, Minister Kollie has urged employers to update records at their various companies.
The Labor Minister also warned aliens working in Liberia to regularize their work permit immediately or face the laws.
According to him, the inspection will leave “no stone untouched” to ensure better incentive for employees in the country.
“They (aliens) are to regularize their work permits every 12 months."
"We are also concern about wages for workers, treatment of employees as well as the work place."
"And when the inspectors get there, they have a list and there are number of things they will be looking for,” Minister Kollie said.
“Every employer in this republic should regularize and update their work place records."
"Today we’ve come as joint team to have this exercise launch and we want to encourage employers and employees to cooperate with the joint team.”
Ahead of the exercise, the team has already divided the 15 counties into various zones for its smooth implementation of the exercise.
The first phase is expected to last for a period of one month.
Kollie further said the partnership with the LIS and LRA would ensure the exercise is effective across the country to improve government’s revenue generation.
Elfreda Tamba, LRA Commissioner General, called on employees and employers to carryout voluntary tax compliance as a way of avoiding penalty.


“While we are prepared to encourage voluntary compliance through education, we are prepared to force compliance,” Commissioner Tamba said.
For his part, LIS Commissioner General, Lemuel Reeves said the measure stems from the firms failure to conform to the laws of Liberia.
“People do not take things serious, so this is the measure to ensure that our employers and the alien community we deal with comply with the laws. We are going to make sure that it is well monitored,” Commissioner Reeves added.
At the same time, The Labor Minister said, he is unaware of any complaint filed against the Security Expert Guard Agency of Liberia or SEGAL about bad labor practice.
Recently some workers of the security firm assigned in Grand Bassa County complained over alleged bad labor practice by the firm.


Several of the firm’s workers, who asked not to be named, told FrontPageAfrica that they work for 12 hours daily instead of the regular eight hours mentioned in the Labor law.
"We signed a contract with the security firm and we used to work for eight hours but after a few times, SEGAL increased our working time to 12 hours without adding any money to our pay but instead they force the time on us," one of the workers said.
But the Labor Minister noted that such information has not been brought to his attention, but promised to swiftly intervene once it is reported.
“To the best of my knowledge; no one has written me, except for the some employees of Intercon assigned at American Embassy who did write, and by tomorrow I will turn it over to the labor standard,” Mr. Kollie stressed.
“I have said this over and over, that the days of employers saying that government is in their pockets are over."
"This is a new day, because when we were campaigning along with President Weah, we campaign with a single message and that message is about change. We come to institute that change and we are prepared to make that change.”
Meanwhile, Minister Kollie has encouraged laborers in Liberia not to be discourage about past administration refusal to address their plights, assuring that MOL willingness will address their concerns.