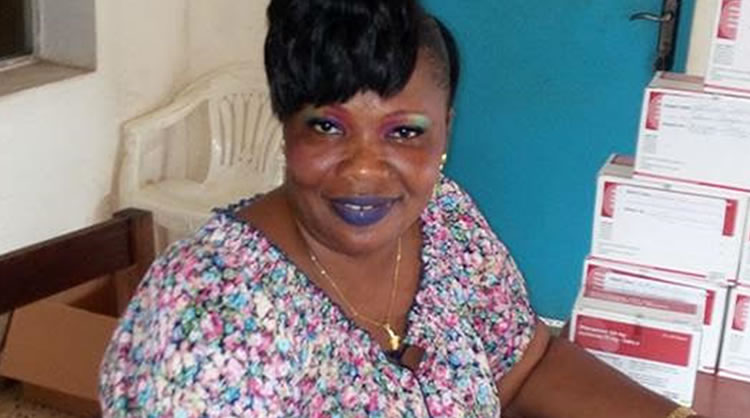 Patients and staffs of the John F. Kennedy Medical Center on Monday morning were in sorrow and disbelief after a long serving nurse of the hospital was denied emergency treatment, causing her death few minutes later.
Jessica Broderick, 45, had gone to the JFK - where she has been working for the last 15 years – to seek treatment for a severe heart pain, but she was told to go through the formalities of registration before she gets treatment.
Eyewitnesses said Jessica collapsed while walking to the registration center, about 15 minutes walk from the main facility on the compound of the hospital.
She was later pronounced dead by 7:25 AM, according to the death certificate issued to her family.
As a devoted Christain and member of the St. Thomas Epsicopal Church in Monrovia, friends and family say Jessica dedicated all her life working for the church and the hospital.
A family friend said after her death that “all Jessica wanted was to save lives but she ended up dying because she was neglected by the very hospital she had dedicated her life to serving.”
On the compound of the hospital, many hospital staffs were angered by her death and were heard saying, “We have killed one of our own.”

Jessica was employed by the JFK in 2002 after graduating from the Tubman National Institute of Medical Arts (TNIMA).
Monday’s incident has renewed concerns about the hospital’s credibility and commitement to serving the country amid a contentious decision by the George Weah-led government to allot US$500,000 in the recast budget for the country’s main referal hospital.
The action of the nurses on assignment leading to Jessica’s death has been condemned by many individuals.
Some say it contravenes conventional medical ethics which emphasizes the urgency to saving lives.
FrontPageAfrica has gathered that the administration of the hospital has launched an investigation into the situation.
JFK, regarded as Liberia’s premier health cneter, continues to face criticism from the public for its insensitivity to patients and the poor quality of health services.
The hospital has also been recieving condemnations for ignoring patients, something that has apparently caused the death of several persons, earning the hospital an infamous alias – Just For Killing or JFK.
The apponitment of Dr. Jerry Brown, celebrated as an Ebola hero for his work at the ELWA Hospital during the Ebola outbreak, spurred expactations of  people in some quarters of the society that he would transform the hospital.
But Brown’s adminstartion would also have to fix the many problems at the hospital in order to regain the prestige the hospaital enjoyed during pre-war Liberia.
An audit by the General Auditing Commission accuses the former administration headed by Dr. Wvannie-Mae Scott McDonald of failing to provide justification for the use of the hospital funds.
During the audit, the GAC said, the variances of US$771,327.92 and L$48,598,333.36 were observed between the total expenditure as per the bank statements of the JFK and the total expenditure as per the financial report prepared by JFK.