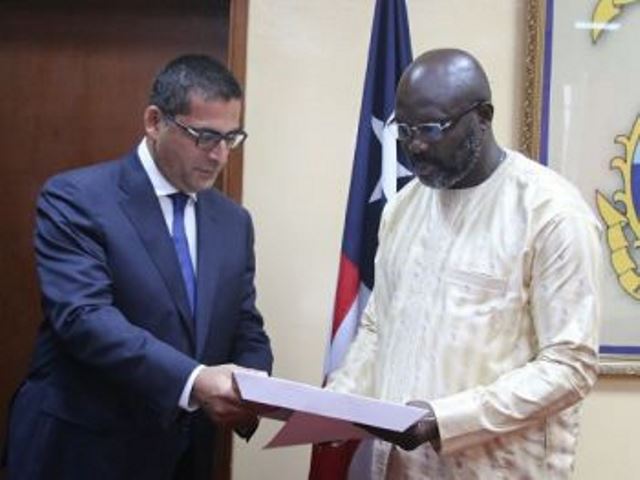 
Welcoming the new Lebanese Ambassador to Liberia on Monday, April 2, 2018, President Weah informed Ambassador Kastoun that he was excited to receive his Letters of Credence and said he looks forward to strengthening the relationship between Liberia and Lebanon.
The Liberian leader also emphasized the need for both countries to constructively engage one another, aimed at mutual benefits. President Weah admonished the new Lebanese Ambassador to engage the Lebanese Community in Liberia and ensure a fair and business-friendly atmosphere.
He noted that the sale of expired goods is not good for the health of Liberians and urged Ambassador Kastoun to prevail on Lebanese merchants in Liberia to ensure that goods brought into the country are not substandard and that their actions and activities are within the confines of the law.
Speaking, the Lebanese Envoy thanked President Weah and said he was honored by the opportunity to present his Letters of Credence at this “very important time in the history of Liberia.” Ambassador Kastoun extended heartfelt felicitations to President Weah on his ascendancy to the Presidency of Liberia, and expressed appreciation for the warm welcome he received so far.
He underscored the need to strengthen the bilateral relationship between Liberia and Lebanon, and commended the people of Liberia for the hospitability accorded the Lebanese Community in the country.
Ambassador Kastoun then presented a special message from the Prime Minister of Lebanon, Saad Hariri, whom he said expressed his government’s willingness to work with the Liberian government in exploring business opportunities.﻿