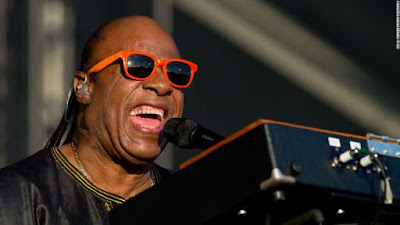 Stevie Wonder has joined Twitter and his first tweet so powerful.
The Grammy-winning superstar paid tribute to Dr. Martin Luther King on Wednesday in his inaugural tweet posted shortly after 8 p.m. ET. The timing of the tweet appears to coincide with the moment the civil rights leader was pronounced dead fifty years ago.
The tweet came with a star-studded video in which the Obamas and celebrities such as Common, Bette Midler, and Billy Crystal talked about their own dreams -- a nod to King's famous "I Have A Dream" speech. King delivered the speech five years before he was assassinated in Memphis.
"On April 4th, 1968 at 7:05 p.m. central time, Dr. King's life was cut tragically short. 50 years later a need for his dream to be fulfilled is far greater than ever," Wonder tweeted on Wednesday. "Share your dream & post your own #DreamStillLives video. Spread love...spread hope."

On April 4th, 1968 at 7:05 p.m. central time, Dr. King’s life was cut tragically short. 50 years later a need for his dream to be fulfilled is far greater than ever.
Share your dream & post your own #DreamStillLives video. Spread love...spread hope. pic.twitter.com/51BaCW78GC
— Stevie Wonder (@StevieWonder) April 5, 2018

Wonder called in a host of famous friends from politics, sports, business, music and entertainment to help him with the video tribute. Kamala Harris, Dave Chappelle, Warren Buffett, Bon Jovi, Katy Perry, Serena Williams and Smokey Robinson also made appearances in the five-minute video.
Wonder's call to action prompted a stream of Twitter users to share their dreams with the #DreamStillLives hashtag.
"My dream is that we learn to care for each other and the world so that my children have a future. I'd love to hear yours," musician Dave Matthews tweeted from the official Dave Matthews Band account. Matthews was also featured in Wonder's video.
Wonder has long been an advocate for keeping King's legacy alive. In 1980, Wonder released the song "Happy Birthday" as a tribute to King, and spearheaded a campaign to make King's birthday a national holiday.
Source: MSN
﻿
﻿