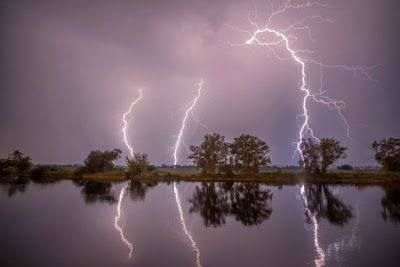 Two young women suffered serious injuries after lightning struck them while they were taking selfies in western Germany, officials said Monday.
A spokesman for Bochum police said first responders found the 23 and 21-year-old women lying on the ground with their clothing torn in the city's Wattenscheid district on Sunday evening.
Paramedics had to resuscitate the 23-year-old and she remains in intensive care with life-threatening injuries, Bochum police spokesman Volker Schuette said.
The younger woman told police the last thing she remembered was walking with her friend on a footpath and recording each other with their smartphones, Schuette told The Associated Press.
"Clearly they were surprised by the storm," he said.
The 21-year-old was also hospitalized, but her life is not thought to be endangered.
Western Europe has experienced heavy storms in recent days, following an unusually long stretch of very warm weather this month.
Flash floods as high as 1.6 meters (5.3 feet) submerged roads and basements Sunday in parts of central Germany. Firefighters in the state of Hesse rescued two women who were trapped in their car by a mudslide. Dozens of flights were canceled at Frankfurt Airport, Germany's busiest, because of storms.
Meteorologists predict temperatures in Germany will hit 33 C (91.4 F) this week, with high humidity raising the prospect of further summer storms.
In Britain, an elderly man died after his car was submerged in water during heavy flooding in Rushall, about 135 miles (215 kilometers) north of London.
The man was taken to a hospital Monday but pronounced dead shortly after arrival. He was believed to have been in his 80s, West Midlands police said.
Britain's Met Office weather service said some areas of the country received the equivalent of one month's average rainfall in just one hour.
Multiple flood warnings were put in place in various parts of the country Monday. The rains followed severe lightning strikes that hit southern England on Saturday night, causing flight delays at Stansted Airport north of London.