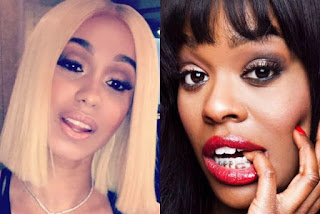 In the aftermath of a public back-and-forth with fellow rapper Azealia Banks, Cardi B has abandoned Instagram, the place where she found fame before ‘Bodak Yellow’ blew our collective minds.
It began with comments Banks made in an interview with US radio show The Breakfast Club on Friday, where Banks was prompted to comment on why she had previously called Cardi B an “illiterate hood rat”. In the Friday interview, she called Cardi B a “caricature of a black woman” who “lowered the bar”.
She also inferred (and later explicitly said) that the Bronx-born rapper, whose father is Dominican and mother is Trinidadian, has shifted her racial identity to further her career.
“Two years ago, the conversation surrounding black women’s culture was really reaching an all-time high,” Banks said, later referencing Beyonce’s 2016 album, Lemonade. “There was just this really, really, really intelligent conversation going on nationally and then everything just kind of changed and then it was like Cardi B.”

“I’m just talking about this caricature of a black woman that black women themselves would never be able to get away with,” Banks said. “Like, if my spelling and grammar was that bad, I’d be cancelled. If Nicki Minaj spelled like that, we would be ragging on her all day.”
After the interview circulated online, Cardi B took to Instagram yesterday to defend her racial identity and spelling with a long text post on Instagram, captured below.

“I’m not trying to represent nobody but myself,” Cardi wrote. “I know who I am! A daughter to a Hispanic father and a Carribean [sic] mother and I’m proud of that! I’ve never dismissed my heritage or my culture, I’ve never pretended to sound like anyone or look like anyone for attention or to make me feel better about who I’m not! …You think your advocating for women and your doing the opposite!” 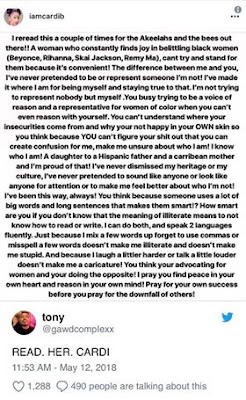 Cardi B also references Banks’ own past with skin bleaching, arguing that the rapper takes her own issues with race out by “taking joy in belittling over black women”, referencing previous feuds with Beyoncé, Remy Ma and Rihanna.
Over on a comment on popular meme account The Shade Room, Cardi also added that she “never asked to be a role model or example” for others.
Banks later responded herself in her own Instagram post, telling Cardi she was “completely missing the point” of her original comments. 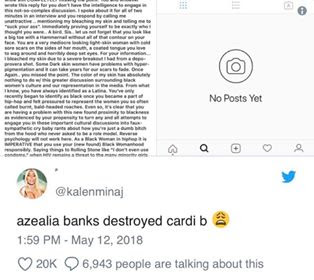 Since then, Cardi has deactivated her Instagram, and turned her Twitter account private after tweeting further, defending the way she talks and announcing she’s going to focus on her pregnancy and family. 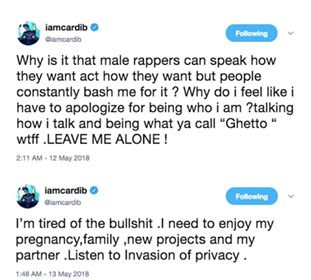 Azealia has also deactivated her twitter account for the time being. Evidently, it’s a conversation neither of them want to be involved in.
Earlier in the hour-long interview with The Breakfast Club, Banks discussed how her many public feuds with musicians (including Nicki Minaj, Rihanna, Iggy Azealia and Zayn Malik) were better known than her music.
While acknowledging that she has repeatedly shared her opinions on other artists, Banks argued that the media continued to perpetuate a “narrative of Azealia Banks as music industry villain” due to their persistent framing of female musicians against each other.
“I could be good for six months and then release a new song, and then the article is just on what I did six months before that,” she said. “Where if Kanye West comes out with a new song, it’ll just be like ‘listen to this song! listen to this song! listen to this song!”, even amongst the bullshit.”