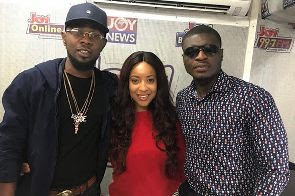 Nigerian musician Patoranking has stated that ‘beefs’ among entertainment personalities are healthy for the industry.

In an interview with Lexis Bill and Joselyn Dumas on Drive Time on Joy FM, the musician, who is currently in Ghana to promote his latest track, ‘So Different,' explained that ‘beefs’ keep personalities on their toes and pushes them to better their craft.

“It’s always good to have a competitive system running. It keeps everybody in check and it makes you not to feel comfortable. But it shouldn’t be more than what it is. Even if we’re doing it, we shouldn’t take it the other way round or outside the context of music,” he said.

However, he cautioned people not to take it to the extreme.

“Beefs are part of the industry but let’s not take away the spirit of music, let’s not kill the passion.”

The ‘Girlio’ hitmaker also revealed that he is still single and stated that women are a distraction to his music career at the moment.

“I’m single. If I take off my shirt right now, you’ll see a big hashtag tattooed on my chest and it says career focus so for now, it is what it is. There’s a saying in Nigeria that ‘if you know where you’re coming from, you definitely know where you’re going to’. I won’t lie to you, I have suffered and so women are a distraction for now,” Patoranking said.

He also commented on his colleague musician Davido’s public display of love for his girlfriend Chioma. According to him, he sees nothing wrong with professing your love publicly.

“There is nothing wrong with that, we all love differently. There are many entrances to the mall or shop; we all want to buy something. So the most important thing is happiness,” he noted.

When asked if he would not mind buying a Porsche car for his girlfriend, he said, “I drive a Porsche, I bought myself a Porsche last year but I’ll buy Joselyn Dumas a Porsche pen.”
﻿