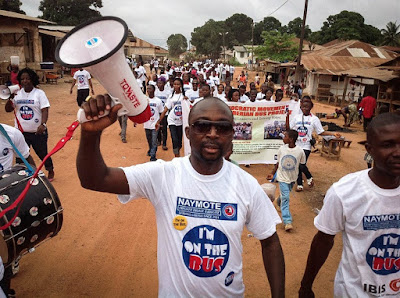 Eddie Jarwolo, 44, has a role in shaping Liberia's future without political office or much money to his name.
The founder and executive director of Naymote Partners for Democratic Development, Jarwolo is grooming a new generation of socially conscious, politically active Liberian youth.

My vision was to have a quality of leader that could make our life better.

“Most elected leaders are not accessible, they’re not responsive,” says the married father of two, “and they’re not accountable to those who elected them.” He is trying to bridge the divide between government and disaffected youth by teaching them to communicate through public forums. At a recent three-hour event organized through Naymote’s Youth Legislative Program, Jarwolo says six legislators, including Deputy Speaker Prince Kermue Moye, met with a diverse group of 50 students and youth leaders to discuss lawmakers’ responsibility to serve them.
Through his School Law and Justice Program, three members of the police department and a lawyer join students at their schools to discuss the meaning of crime and due process. The goal is to help young people understand and access the law, as well as prevent crime in their own schools and communities. Jarwolo also established the Young Political Leadership School in April 2016 to train new political leaders between the ages of 18 and 35.
So far, 330 people have graduated from the 12-week program, and eight have used their new speaking and organizing skills to jump into politics, according to Jarwolo. One of them, Sekou Kalasco Jomanday, scored the coveted role of aide to Liberian President George Weah.

The violence that besieged Liberia from 1989 to 2003 separated a teenage Jarwolo from his parents and seven siblings. His father, a teacher, was stuck with his mother at the Rural Teacher Training Institute in Kakata, while Jarwolo stayed with a friend and finished high school in Monrovia. The family caring for him eventually fled to the U.S., and his friend was killed on his way to join them.   “That was a terrible time in my life,” he says. “I was like a street kid.” But then he got a lucky break.
At a basketball game, Jarwolo met Hassan Jawhary, a Lebanese businessman. Jawhary financed the ambitious young man’s first two semesters at African Methodist Episcopal University in Monrovia starting in 1996, in exchange for helping manage the national volleyball team. But school made it hard for Jarwolo to keep up the work, and the funds dried up. So he started a nongovernmental organization to help raise money for himself and other young Liberians.
As soon as he graduated with his bachelor’s in sociology in 2001, Jarwolo founded Naymote (National Youth Movement for Transparent Elections). While everyone else was documenting warlord and president Charles Taylor’s crimes against humanity, Jarwolo wanted to prepare Liberia for future elections. “My vision was to have a quality of leader that could make our life better,” he says.
Between 2005 and 2011, Jarwolo participated in three U.S. exchange and fellowship programs, including the five-month Reagan-Fascell Democracy Fellows program in Washington, D.C., and completed a master’s in public administration in Liberia. Dave Peterson, senior director of the Africa Program of the National Endowment for Democracy, says Jarwolo is “truly committed to making the world a better place.” He applied his American know-how in Liberia by borrowing an idea from Oregon: The volunteer-driven Liberia Bus Project is a nonpartisan mission to educate the country’s electorate on political issues, rolling through communities and blasting out information via cellphone to inaccessible areas. He calls the effort “my payback to the American taxpayer” for his fellowships.
It was also a test drive of Jarwolo’s nationwide reach, as he works toward his ultimate goal: priming a future Liberian president. In Africa if people want to get rich, Jarwolo says, they get a government job. If they want to sacrifice and help people, they do civil society work. “I was not born to be rich,” he says. “I was born to serve.”