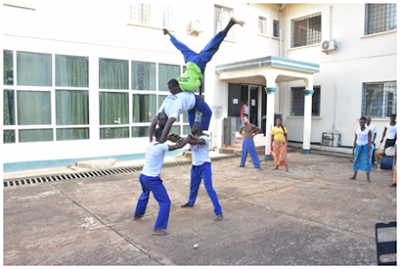 
Eddie Theater has begun dramatically transmitting educational messages to targeted communities in the society.
The drama, uniquely segmented in three sophisticated series under the theme:“THE WAHALA OVER GREBO-KRAHN” pinpoints the layers of challenges including confrontation and hurdles which had over the years hindered the creation of the park. Basically it aims to underscore the relevance of our national forests and all of their constituent biodiversity that are pillars as far as our national existence is concerned.
The drama discourages the ugly tendency of depleting or abusing the forest resource by poachers and illegal miners, something which has and continues to undercut our national economy to the gross disadvantage of present and succeeding generations. It essentially mirrors the value of what Mother Naturehas endowed us as nation and people while encouraging the communities to avoid the wanton abuseof our rich heritage so as to safeguard potential risk.
The group which comprises young men and women with diverse innovation and inspiration seems to be the best trumpeter as far as the prevailing conservation initiatives are concerned. It’s being sponsored by one of FDA’s potential partner, the Wild Chimpanzee Foundation (WCF) which is actively involved with the conservation works in the South East specifically the newly created Grebo-Krahn national park along with other partners including the AMBERO/GIZ, WABBIC, SCNL, among others.
At a well-attended ceremony held at the FDA Compound and witnessed by a cross section of FDA staff and curiosity driven community members on Friday May 25, 2018 in Monrovia, the drama group thrilled the audience with heart-touching actions and messages that are dubbed as suitable conservation play especially at a time when Liberia has just made a memorable history by giving birth to two national parks at the same.
Making introductory remarks at the program earlier, the Country Director of the Wild Chimpanzee Foundation (WCF), DR. Annika Hillers underscored the important role the Eddie Theater is set to play in the ongoing national conservation initiatives that involves a consortium of collaborating partners in forest sector. She promised WCF’s unrelenting support to the group whom she described as spectacular as far as the national task of conservation is concerned and lauded the government of Liberia and the FDA for the 2006 National Forestry Reform law which is practically taking root in the forest sector.
Representing FDA Managing Director C. Mike Doryen who was absent due to other official engagement, the Human Resource Manager, Mrs. Debbie Moulton, lauded WFC for the role it continues to play to ensure that the populace gets the needed education as it relates to the relevance of preserving and conserving the forest  which remains our proud heritage. She noted that management is ever prepared to embrace any positive idea that tends to promote conservation in Liberia consistent with the tenet of sustainable management of the Liberian forest, an FDA release said.
It can be recalled that during a recent program marking the official launch of the Liberia Conservation Fund in Monrovia, the Forestry Development Authority (FDA) and Conservation International (CI) committed two million United State dollars in cash and pledges respectively to boost the managements of the newly created national parks and all protected areas across the country set aside by law.
﻿