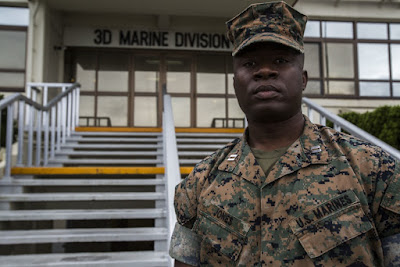 CAMP COURTNEY, Japan--In 2002 Sgt. George Jones, a Marine Corps infantryman, stated that his dream was to retire as an officer in the U.S. Marine Corps. Jones, a Liberia, West Africa native, had at that point survived a civil war in his homeland and joined what he called “The best looking service in the world.”

“In 1994, I came to America as an 18 year old kid with my parents,” said Jones, the G-4 current operations officer for 3rd Marine Division. “We came to America because it was my dream to visit the United States and at the time they were the only ones offering refugees the chance to resettle.”

Jones said while staying in Liberia he stayed pretty close to an American embassy. This familiarization led to his wanting to become a U.S. Marine at a very young age.

“It was obvious why I joined the Marine Corps,” said Jones. “I like a challenge, and I wanted to be one of the best of the best.”

Upon arrival to the U.S, Jones started paying for college course out of his own pocket but realized it was very expensive. He kept his dream alive of becoming a U.S. Marine and stopped college to attend Parris Island in South Carolina.

While an enlisted Marine, Jones was able to apply to the former commissioning program known as the Broadened Opportunity for Officer Selection and Training program (BOOST), and earned his commission.
Jones has now been an officer for eight years. His Marines say he has been a great influence amongst those he leads.

“My first impression of Capt. Jones was that he was one of the most thorough and articulated Marines I had ever met,” said Master Sgt. Michael Lester, the logistics operations chief for 3rd Marine Division. “My saying about him is that pressure makes diamonds, because that’s what he does. He puts pressure on you, because he’s going to make you shine.”

Now with only two years left until retirement, Jones has proven to himself and the world that anyone can achieve their goals if they pursue them﻿