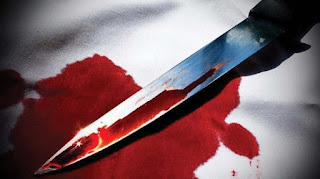 Saclepea, Nimba County – Police in Nimba County have launched a search for a 35-year-old man who allegedly used acid to kill his Wife.
Fugitive Marcus Ben, a resident of Lesonnoh Burtian Town in District Number eight, Nimba County, is on the run after allegedly killing his 32-year-old wife, Yar Blemie for refusing to have sex with him.
The couple had four children and lived together for several years, community members said.
Saye Zeah, younger brother of the deceased, said the suspect had threatened to kill his wife on several occasions.
She had informed her in-laws, who reside in Flumpa Town several miles away from their home, about the threats but to no avail.
He explained that the couple was involved in a fistfight during the night and the next day, which was on Friday 4 May the decease left for market in a nearby Town.

“When she returned the suspect informed the children that their mother came from the market and told her to come on the farm to help him transport the rubber from the bush,” Zeah told reporters, adding that there where she was killed.
Our correspondent who visited the rubber farm where the accident occurred said the couple was involved in a fistfight and her body was found about 57 foot away from rubber farm.
A knife used for tapping rubber, cutlass, and sticks were found on the crime scene – where the deceased body was found.
A 15-man juror found that it was where the suspect allegedly forced the decease to drink the acid and later broke her neck.
The body was discovered by one Bob Mehin a man who has his farm near the suspect’s.
“About 5.30 PM while on my way from the town toward the farm I saw the lady lying in the center of the road in the rubber farm, so I rushed in the town to inform the Citizens in the Town,” Mehin said.
Report by Franklin Doloquee, FPA Contributor