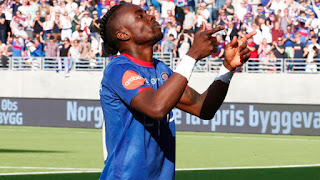 Liberian International Striker, Sam Johnson scored the lone goal for his club today as they continue their wining strike. This win took his team up to fifth on the table with 18 points.

The only goal of the match came in 14 minutes after the Striker show off an excellent effort,  converting the goal clinically in the 18 yard box, after been faced in an one versus one situation with Stabaek Goalkeeper.

The Liberian Striker was once again the match winner in Vaalerenga previous game against Sandefjord, a game that ended 1-0 in Vaalerenga favor.

Sam Johnson now sits second on the goal chat with 7 goals from 10 matches, his goal ratio is 0.7 per game while Marcus Pedersen from Strømsgodset is in the first position with 8 goals.

The Striker has been directly involve with 13 points from the 18 points Vaalerenga now boost. The 25 year old performance shows that he is on track for the Norwegian Eliteserien side.